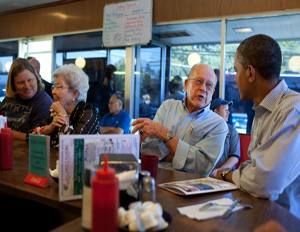 After Senate Republicans successfully blocked debate on the American Jobs Act, President Obama implemented a new strategy of forcing congressional Republicans to vote on the bill in “bite-size pieces.â€ The commander in chief has been testing the tactic during a three-day trip through two key swing states, North Carolina and Virginia.

During campaign stops in Asheville and Jamestown, NC, Obama chastised the GOP and ridiculed a package offered by Senate Republicans, which portrayed him as being regressive.

“The ideas we put forward are ideas that in the past have been supported by Democrats and Republicans. So the question is what makes it different this time–other than that I proposed it?â€ said the president.

Pointing to the GOP plan–which he said is “not a jobs planâ€–Obama asserted that it would drill more, roll back Wall Street development and repeal health-care reform.

“Their plan says we’ll be better off if we deny 30 million Americans affordable health-care choices and kick young people off their parents’ health insurance plans. Our plan says we’re better off if we give virtually every small business and worker in America a tax cut so that they’ve got more money in their pockets to hire more workers and to spend more,â€ Obama said. “Their plan says we need to go back to the good old days before the financial crisis when Wall Street wrote its own rules. Our plans say we need to make it easier for small businesses on Main Street to grow and to hire and to push the economy forward.â€

The president is calling on Congress this week to begin considering the bill in pieces, starting with the provision to save or create jobs for teachers and first responders, like police officers and firefighters. Then he’ll ask them to vote on a measure to put construction workers back on the job to restore crumbling bridges, roads and airports and update approximately 35,000 public schools.

It’s no surprise that Republican lawmakers are offended by the president’s new tactic. In addition to accusing him of campaigning instead of leading or even meeting with them to find common ground, they claim he is waging divisive class warfare.

“He wants people to think that the problem isn’t his policies,â€ Senate Republican Leader Mitch McConnell said Tuesday. “It’s those mean Republicans in Congress who oppose them. But the president leaves a few things out of the re-election script that he brought along on his bus tour.â€

He also added that Obama is trying to “deflect attentionâ€ from his own “failedâ€ record on the economy and that there are 1.5 million fewer jobs since the administration’s stimulus plan was implemented. “On the number one issue we face, jobs and the economy, the president’s policies haven’t worked as advertised,â€ McConnell said, “we’re now living under economic policies that president Obama himself put in place. This isn’t something you’ll hear on the bus tour.â€

Senate Majority Leader Harry Reid plans to put up for a vote this week on the provision for teachers and first responders. He’s also still calling for the nation’s top earners to pay their “fair shareâ€ in the form of higher taxes.

“This bill that we’re advancing would … save or create 400,000 jobs for some people who are important to us in our communities–teachers, firefighters, police officers,â€ Reid said during Tuesday’s press conference. “Funny thing about this is that the American people agree with this overwhelmingly, including Republicans. A CNN poll recently released–within the last 24 hours, to be exact–showed that 76 percent of the American people and 56 percent of the Republicans supported our effort to ask millionaires to pay their fair share.â€