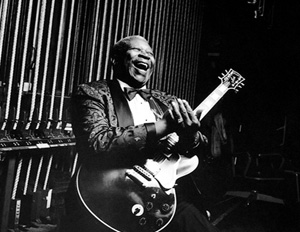 Riley B. King, the blues legend known popularly as B.B. King, died Thursday night, according to reports. He was 89.

His official Website indicates he died in his sleep. He’d been battling diabetes and other health issues for the past few years.

A Mississippi native, King’s music career spans more than 60 years, and he had an iconic impact on the industry, influencing greats such as Eric Clapton, Sheryl Crow, Mick Jagger and Elton John.

He was ranked No. 6 on Rolling Stone’s 100 Greatest Guitarists of All Time in 2011 and was also an inductee in the Rock and Roll Hall of Fame in 1987. The epitome of longevity and adaptability while staying true to his music and passion, King appeared at more than 200 concerts per year on average into his 70s.

Other awards and honors include the NARAS’ Lifetime Achievement Grammy Award, the National Award of Distinction from the University of Mississippi, and honorary doctorates from Tougaloo (MS) College, Yale University, Berklee College of Music, Rhodes College of Memphis, Mississippi Valley State University, and Brown Universit. In 1992, he received.

As a brand builder and entrepreneur, he opened B.B. King’s Blues Club in 1991, and the franchise has expanded to Los Angeles, New York City, and Connecticut. As an author, he released his autobiography, “Blues All Around Me,â€ an international bestseller.

"The blues has lost its king, and America has lost a legend" –Obama on the passing of #BBKing: http://t.co/ASs9ovvWrf pic.twitter.com/JWAl3vsFPQ

More fans, friends, and celebrities took to social media to express their condolences and love for the music icon:

An international treasure, a conduit for culture & a personal friend.He made #blues an art form. RIP #BBKing #Lucille pic.twitter.com/YgYYBJwHP7

BB King Calls This One Of His Best Performances (inside Sing Sing Prison in New York in 1970s): https://t.co/NYgZiyCcu5

God bless the life of a musical icon…. #BBKING

My prayers and love to the family of the legendary BB King http://t.co/jwu6xCoQgP

the thrill will never be gone,but always missed, #BBKing