Furniture Companies to Cough up $1.5 Million After Ohio State Win 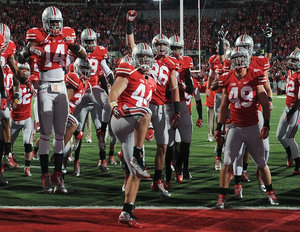 After the Ohio State Buckeyes defeat against the Oregon Ducks during the CFP Championship last night, with 42-point victory, more than 500 customers in the area became entitled to about $1.5 million in free furniture. Morris Furniture Co. ran the “Big Game Promotionâ€ at 15 Morris Home Furnishings and Ashley Furniture Home Stores in Cincinnati, Columbus, and Dayton. The stores held that if the Buckeyes beat Alabama and Oregon by at least seven points or more, they would promise to refund the money paid by customers. Between the days of Dec. 17 and Jan. 1, any customer who paid for at least $1,999 of furniture in one single day became qualified for a full rebate.

According to reports, a third-party company underwrote the promotion and will pay customers. In order for them to receive their money, they are required to return to the store of purchase and to fill out a claim form first.

Larry Klaben, the CEO of Morris Home Furnishings, Ashley Furniture and The Better Sleep Shop, told the Dayton Daily News, “”It’s been a great story for the Buckeyes and it has created good buzz for our stores.â€ He also said that he does not regret creating the promotion. “I think it’s been an incredible season for the Buckeyes, now on their third-string quarterback. And who would have thought they would have run away with the Big Ten championship. Just the momentum and excitement out there, I think it’s just incredible,â€ Klaben stated. Twitter also erupted after, with customers tweeting their excitement.

What do you think about companies adding sports wins or betting to promotions? Share your thoughts with us below.