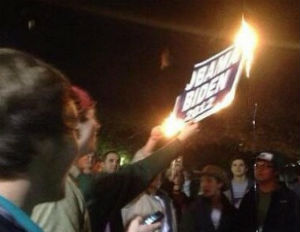 James Meredith, the man who famously integrated the University of Mississippi in 1962, urged black students at the university to ignore the racially charged protests that broke out after President Obama’s re-election last week.

“It cost a lot of money,” MeredithÂ told WLOX-TV. Â “Most of the students, particularly the black students, have to borrow it to go to Ole Miss. I don’t see how anybody can afford to let nonsense and foolishness deter their purpose.”

Some students burned an Obama-Biden sign during the unrest, and two students were arrested.

Hundreds of studentsÂ held a candlelight vigil on campus in response to the protest that followed the election.

“As we have acknowledged throughout this year of recognizing 50 years of racial integration at our university, despite evidence of progress, we still live in an imperfect world,” the school’s chancellor said in a written statement.