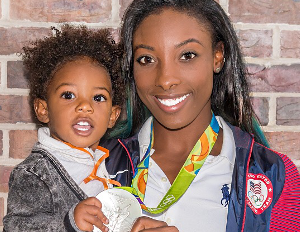 On her way to an Olympic silver medal, Philadelphia’s own Nia Ali has jumped over many of life’s hurdles to reach the heights of her career. But growing up in Philadelphia’s gritty Germantown neighborhood built a toughness that Ali says helped her to battle through many of life’s obstacles.

Black Enterprise had the opportunity to talk with the Olympian about her challenging year leading up to the Rio Olympics, what it feels like to compete on the world’s biggest stage, and advice for young women of color.

Black Enterprise: Your road to Rio was a bumpy ride. What did you have to endure as you began your quest for an Olympic medal?

Ali: I had a baby on May 8, 2015, so I had to endure a lot of mental challenges that I wasn’t quite prepared for. To be away from my family and make the decision to go back to Los Angeles on my own with a newborn was a real struggle. Waking up every morning to take my son to daycare, go to practice, and then pick my son up to be a full-time mom again was a mental struggle at the beginning.

Throughout the year, I was dealing with chronic fatigue during a time when rest was such a crucial part of being able to train. You have to have a rested body to put forth the full amount of effort to compete at your best. But through it all, I did have a tremendous amount of support from my family so I’m grateful for that.

BE: What are the emotions and feelings you experienced when competing on the biggest athletic stage in the world?

Ali: Mainly anxiety and trying to contain my excitement. Being around good friends of mine Brianna (Rollins), and Kristi (Castlin) and being able to compete with them brought my spirits up. It is hard to be there in the best shape ever because there is tons of pressure on you from coaches and people around the world. I wanted to perform so well so I prayed a lot and surrounded myself with people who could distract me in a positive way.

BE: How do you align yourself with potential businesses and endorsement opportunities?

Ali: It has been a struggle for meÂ because I had no idea how it was going to be. I’ve won things before. After winning my second indoor title in March of this year I returned home and everything remained pretty much the same. I did not know how big of a platform I would be on once I got back from Rio and it has been a blessing but very overwhelming at times. I talk to people who have been through it. Reaching out to certain mentors for advice on handling being pulled in different directions, and how to say no. I have been incredibly blessed with the amount of opportunities that have come my way and doors that have been opened but I am still trying to organize everything.

BE: When you think of the thousands of young women of color who watched you compete, what are three things you would like them to take away from your performance and apply to their lives?