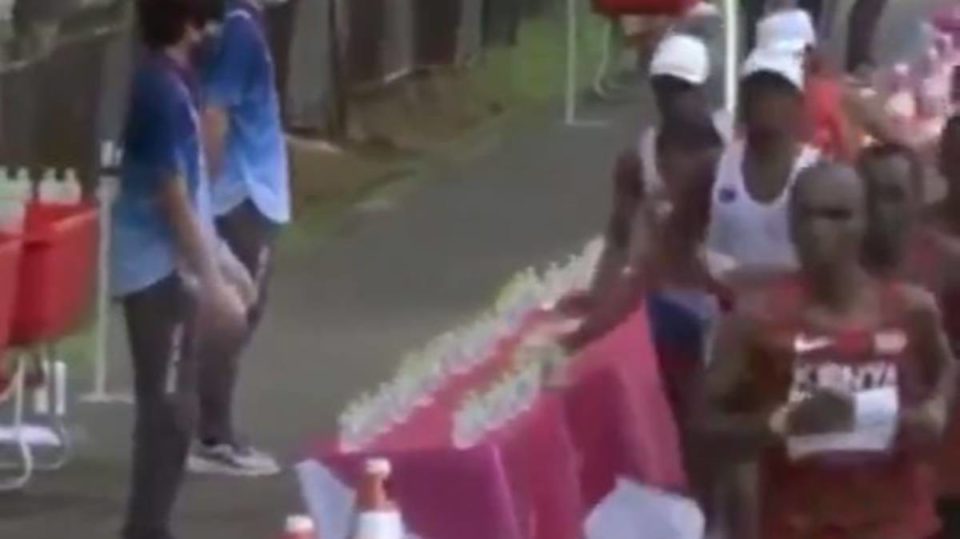 A French Olympic marathon runner faces worldwide backlash after he seemingly knocked over a row of waters meant for him and his fellow athletes.

Morhad Amdouni is accused of sabotaging the fate of the runners who were behind him during the marathon on Sunday, Insider reported. Competitors met the final day of the Olympic Games in Tokyo with sweltering 95-degree heat.

As with all races, there was a table set up with bottles of water for the runners to grab as they sprinted toward the finish line. While most athletes grabbed a bottle and kept it moving, when Amdouni came toward the table, he appeared to purposely knock down an entire row of water bottles as he ran off.

After the clip aired, Amdouni became the center of public scrutiny from the likes of Piers Morgan, who felt he was practicing poor sportsmanship.

“The Gold medal for biggest d*ckhead of the Tokyo Olympics goes to French marathon runner Morhad Amdouni who deliberately knocks over all the water for his fellow competitors…Unbelievable!” Morgan tweeted.

BREAKING: The Gold medal for biggest d*ckhead of the Tokyo Olympics goes to French marathon runner Morhad Amdouni who deliberately knocks over all the water for his fellow competitors…Unbelievable! pic.twitter.com/D4IwmlAHlL

After catching wind of all the heat coming his way, Amdouni took to Facebook to explain why it was just a mistake caused by the slippery bottles.

“To guarantee freshness to the bottles, these are soaked in water,” Amdouni explained. “Which makes them slippery. However, it is clear that I am trying to get one from the beginning of the row but these slide when we touch them.”

In an Instagram video posted earlier in the day, Amdouni blamed his slip-up on his “fatigue.”

‘With fatigue and all that, I was gradually starting to lose lucidity and energy, while hanging on,” he claimed.

Even if he was trying to cheat, it didn’t work. Amdouni came in 17th place while the runner who was directly behind him—and unable to grab a water bottle—came in second place.