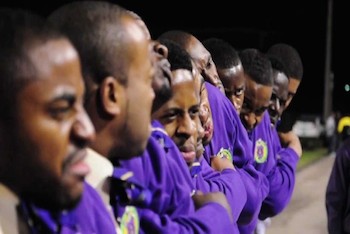 A member of the black fraternity, Kappa Alpha Psi, has spurred fellow organization, Omega Psi Phi, to raise awareness about the perils of domestic abuse.

Angelo Smith Jr. recently confessed to killing his girlfriend, a former Guilford County teacher named Bianca Tanner, and will appear before a judge for an arraignment today (July 14). The assailant was taken into custody last week and was photographed wearing his Kappa Alpha Psi fraternity shirt.

Police sources believe it was actually Smith’s fraternity brother who led investigators to what they say is Tanner’s body. The news about the murder and subsequent investigation linked Smith and his crime to thousands of Greek organization members across the country.

While others may believe that the event gives them all a black eye, Omega Psi Phi has taken steps to make sure that awareness about domestic violence is paramount. “It kind of gave a negative connotation of what Greek organizations are about,” says Omega Psi Phi’s Ty Turner. “It was not a good look for our community.”

Last week, the Ques held a rally in hopes of bringing news about domestic violence to their North Carolina community. Turner knew the victim and the assailant during their respective college days in Greensboro, and never thought their relationship would turn into a tragedy.