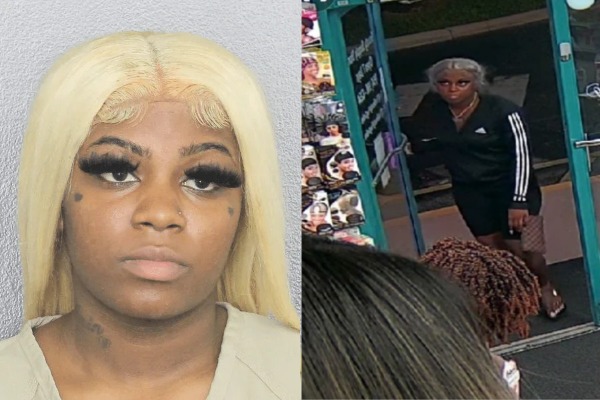 One of three women caught on surveillance pepper-spraying a cashier so that they could rob a beauty supply store of wigs has been arrested.

The incident recorded a pregnant woman, another woman carrying a baby, and a third woman, seen in now-viral security footage, robbing the Beauty Plug store in Tamarac, Florida, Local 10 reports. In the shocking video, three women can be seen walking into the beauty supply and grabbing a few items as if they were making a purchase.

But then one woman pulls out pepper spray and attacks the young cashier before the women flee the store. The cashier screams for her mother, who comes out to chase down the robbers, but they were already gone.

“Tonight we experienced a horrific event. 3 girls came into our store attacked my daughter with pepper spray and stole multiple lace wigs,” the owner wrote in an Instagram post.

“I cannot believe this. If you recognize any of them PLEASE contact us. One was very pregnant and the other was holding a baby that approx. 6-8 months.”

On Friday, one of the suspects, Eonie Jones, 18, was taken into police custody five days after the robbery.

Jones has been charged with robbery with a weapon and appeared before a Broward County judge on Saturday morning. The judge noted Jones has 15 other charges from separate cases with another judge during the hearing.

She is being held on a $25,000 bond at Broward County’s Sheriff’s Office. Jones faces charges of first-degree robbery with a weapon, Yahoo News reports.

The beauty supply store’s owner confirmed that Jones was the one who pepper-sprayed her daughter and noted the teen was wearing one of the stolen wigs in her mugshot.

“I hope those wigs were worth it because once you decided to pepper spray my child, you turn a simple petty theft into robbery w/assault & battery and because you had that baby with you, you’ll be charged on that too,” the owner wrote on Instagram.

“Sad that you’re about to lose your children and freedom over some wigs. Dumb low-life.”