One on One With Steve Harvey 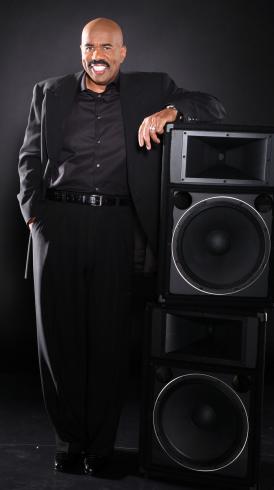 When anyone hears the name Steve Harvey the word funny easily comes to mind. After all, this Original Kings of Comedy star and popular former sitcom figure still plays to sold-out shows from coast to coast with his side-splitting stand-up routine. But in more recent years, Harvey has taken the radio industry by storm: His syndicated program, The Steve Harvey Morning Show, plays in over 60 markets reaching some seven million listeners. Yet Harvey wants to make it clear that he’s not just Mr. Jokes. Each day on his show he seeks to inspire and uplift listeners as much as he wants to ease their day with humor. This week Harvey took time out of his busy schedule to speak with BlackEnterprise.com about his career and the radio industry today.

BLACK ENTERPRISE: You’ve obviously had great success in other arenas, including stand-up comedy and television. Have you always had an interest in radio?

Steve Harvey: Not really. This is really God’s call for me because it has helped me expose some aspects of my life that are important other than telling jokes. My initial claim to fame was telling jokes. That’s my gift. But I also have a passion for our people, and I have a lot of information God has had me learn over the years, so that I could have something to share.

Your show allows you to connect with people all across the country. What have you gleaned about black people that you perhaps didn’t know before?

I don’t know that I didn’t know it before because I’m an expert on two things: manhood and being black. I’m an expert on manhood because I’ve spent my entire adult life trying to get better at it, and I had a great example in my father. I’m an expert at being black because I’ve spent my entire 51 years black. So I think all of those years of experience and having been fortunate enough to travel to all the different regions of the country and talking to our people and entertaining our people, you see that we all have a very common thread. I don’t care if I’m telling jokes in Los Angeles, Mississippi, or Miami, black people have a common thread. And if you understand that common thread that connects us as black people–experiences growing up, the church, and family–you can transfer it to radio.

One of the good things about your show and the other syndicated shows is that you reach so many people. However, some of the critics of syndication feel that good local shows have been squeezed out. What are your thoughts on that?

Radio is a world of big business and consolidation, and everybody is trying to get their fair share of the market. The more station owners can gather up, the bigger their piece of the pie. Station owners are trying to find a way to get more listeners in order to