One Step Back, Two Steps Forward 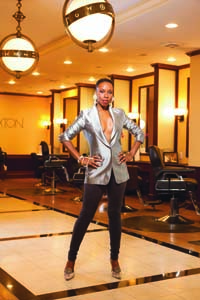 Now: Barbering, hairstyling, and spa services for men. BBRAXTON Grooming Academy is training the next generation of barbers.

Next: An annual membership and customer loyalty program to reward current patrons. A shop in Atlanta is in the works.

It all seemed so simple to Brenda Braxton. AfterÂ  flipping through a men’s magazine, she and her then husband, Anthony Van Putten, were inspired to open an upscale salon and day spa targeting men of color. In 2006, the couple opened BBRAXTON Exceptional Grooming For Exceptional Men. Located in a “greenâ€ development in Harlem, the salon offered barbering services, hot towel shaves, manicures, pedicures, facials, an Ike Behar custom shirt service, VIP transportation, and a well-stocked bar.

At the time, Braxton was starring on Broadway in a revival of the musical Chicago. But the actress’s dream soon turned into dismal reality when she was forced to close the salon in November of 2009 because of mismanagement. Improperly logged hours and rising costs plagued the business.

Though Braxton and Van Putten shared the same vision, she says they both lacked business management skills. “Neither of us was prepared for the day-to-day pressures of running our own business,â€ says Braxton, who spent most of her time performing in Chicago. “My husband and I went into it with a ‘you and me against the world’ attitude, thinking we would learn as we went along.â€

When Braxton first opened the salon, she tapped into the equity in her Harlem brownstone for startup capital. Initially the gamble seemed to pay off. BBRAXTON was featured in the August 2007 issue of black enterprise as the Best Male Spa in our “Guide to the Best of Everything.â€ The salon generated $253,600 in revenues in 2008 and for most of 2009 averaged 2,000 clients.

But because of overspending, Braxton was soon scrambling to pay her mortgage, landlord, and creditors as well as make payroll, forcing the business to close at the end of 2009. She also lost her brownstone. But Braxton remained determined. In January, less than two years after closing shop, BBRAXTON was reopened, its owner now armed with intrepid optimism, myriad lessons learned, and a fresh strategy.

Through close friends and personal connections, Braxton found a private investor who infused more than $100,000 in the business to help her rebuild. Moreover, by keeping in contact with her landlord, she was able to reopen at the same location and to work out a payment plan. “We made sure to keep our landlord in the loop when we realized we were having cash flow problems,â€ says Braxton. “He appreciated our honesty and was willing to work with us.â€