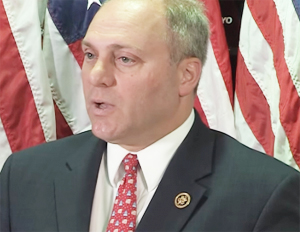 The Congressional Black Caucus gathered yesterday to celebrate the 150th anniversary of the ratification of the 13th AmmendmentÂ which abolished slavery.

The event was held in the Emancipation Hall of the Capitol Visitors Center, and President Barack Obama was on hand to deliver the keynote address for the momentous occasion.

As House Majority Whip, it is only natural that Rep. Scalise would be expected to attend the commemoration of what is arguably the most critical event in U.S. history. However, his inclusion in the speaker lineup will surely result in some head-scratching for those who have not forgotten the scandals surrounding his questionable decisions in the area of race relations.

In 2002, Scalise spoke at a white supremacist rally hosted by the hate group, European-American Unity and Rights Organization. In 1999, he went on record saying that he agreed with the conservative views of David Duke, a former Grand Wizard of the Klu Klux Klan.

This country is at a point where all instances of bi-partisanship are not only welcome, but met with the relief of a nation weary of hyper-partisan finger-pointing. However, there must be ways to unite a fractured nation, other than allowing a man who has publicly sympathized with the leaders of a terrorist organization that targets black people, to speak at an event commemorating the end of the worst atrocity committed on U.S. soil against black people.