OPINION: Keep The Smiths Name Out Your Mouth 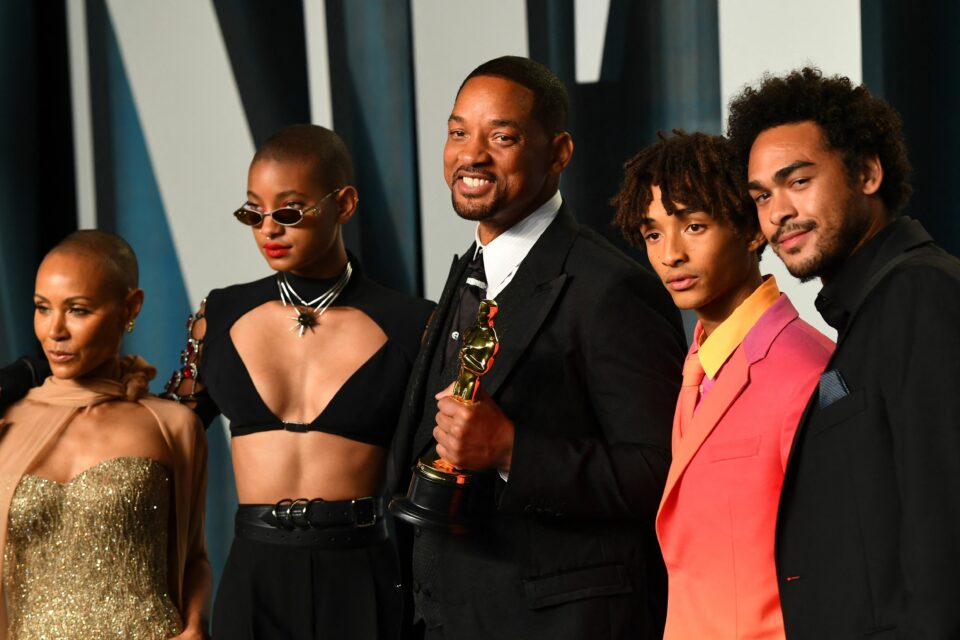 TOPSHOT - US actor Will Smith, with his award for Best Actor in a Leading Role for "King Richard", poses with (from R) his sons Trey Smith and Jaden Smith, daughter Willow Smith and wife Jada Pinkett Smith, as they attend the 2022 Vanity Fair Oscar Party following the 94th Oscars at the The Wallis Annenberg Center for the Performing Arts in Beverly Hills, California on March 27, 2022. (Photo by Patrick T. FALLON / AFP) (Photo by PATRICK T. FALLON/AFP via Getty Images)

Disclaimer: The views and opinions expressed in this commentary are those of the speaker and do not necessarily reflect the opinions or positions of BLACK ENTERPRISE. First of all, major congratulations to Will Packer and his all-Black production team for putting on an inclusive and entertaining show last night.

The 94th Academy Awards featured a trio of funny female hosts, a choir during the In Memoriam segment, and a performance by Beyoncé. An all-around win and another feather in Mr. Packer’s cap. Well done!Of course, most people are still discussing the slap heard around the world delivered by Oscar-winning actor Will Smith to comedian Chris Rock after the latter made a joke in poor taste about Jada Pinkett Smith’s hair loss. I’ve seen all the pearl-clutching around the interwebs since the unfortunate incident happened, and I want to take a few moments to implore many of you to take the advice Will gave Chris Rock a step further and simply keep the Smiths’ name out of your mouths. Periodt.

First to all of you, to those who are embarrassed that Will did this at the Oscars, please spare us your hand-wringing. Chris made the joke at the Oscars. There is a time and a place for everything, and the best time and place for correction is usually at the time and place of the infraction. When will y’all let these respectability politics go!

If you really believe that white people hold the moral high ground, I feel sorry for you. Do you really think Will Smith slapping Chris Rock at The Oscars makes Black people look bad to people who didn’t already dislike Black people to begin with?

Just ask Martin Luther King Jr.’s daughter Bernice King who took to Twitter to remind folks that that tired narrative needs to take a back seat on your train of thought.

Be Love, but please don’t think that a person who uses one moment to malign a whole group of people did not do so before that moment.

Truth be told and historically speaking, white folks have a long history of protecting their womenfolk (let that marinate)! You out here worried about being dignified to impress people who would not invite you anyway! But you were fine with Jada Pinkett Smith being mocked for her appearance in front of an international audience. Those of you suggesting that Will should have been escorted out immediately, that Chis Rock should press charges, that Will should be arrested are the embarrassing ones.

We literally watched mostly white people storm the Capitol, defecate in the halls of justice, and go on a manhunt for the Speaker of the House and the Vice President of the United States with zip ties and most of them have gotten slaps on the wrist. And you want me to condemn Will Smith? I think not!

Secondly, for those of you who said he should have had that same energy for Regina Hall, August Alsina, Laverne Cox, or any of the many other people who have taken swipes at the Smiths’ over their ‘entanglement’ situation — could you be any more clueless?

The Smiths have taken the high road in that situation. They obviously wanted it to stay private, but Alsina was a party to the situation as well, and he had a right to tell his story. They addressed the rumors head-on and took their licks for TWO YEARS! Because they knew that by addressing it, they opened themselves up to commentary, they have never come for anyone for the teasing they have endured over that situation. This was an entirely different situation! This is his wife’s health and her self-image.

Many of you are too scared to be as transparent and open as Jada, and that’s why you keep those wigs, quick weaves, and frontals in your head, simultaneously covering and causing your bald spots and meager edges. Have some empathy and compassion for a Black woman who is coming to terms with living comfortably with a chronic disease. I could go on and on, but I’ll simply end with how it saddens me to see the lack of empathy for Will and Jada. I know that many of you judge them for their marriage and parenting. You call them weird on Twitter and make memes out of their honesty. I feel bad for you.

Most of you have never known honor, love, respect, and admiration in a romantic relationship. You think it’s whack that they were honest with each other about seeing other people during a difficult time in their relationship, but you think it’s normal to tell lies and keep secrets. Some of you are right now trapped in mediocre or even miserable relationships because you can’t be honest about your needs and are too afraid of what people will think if you admit what you really want out loud. And you are threatened when others refuse to succumb to the same fear that keeps you silent in the face of disrespect and those Brazilian bundles glued to your head. I’ll end with respect to Chris Rock for not further escalating the situation and having the absolute best response. After the second time Will told him to keep Jada’s name out of his mouth, he uttered the two words that should have put this matter to rest: I will.

Reneé Mack Jones is a Relationship Mediator, Speaker, the author of the Peace In My Home Planners for Busy Couples and the host of the upcoming podcast I’d Rather Die Alone.