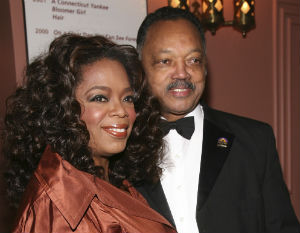 WinfreyÂ told the 300 JCSU graduates and their families that she had every intention of speaking at the college in spite of the boycott in North Carolina. The media mogul commented, “I got calls from members of the press asking me was I going to boycott being here today because of North Carolina and y’all’s issues.â€

WinfreyÂ added, “And I said, ‘Listen, anybody that knows me knows: I don’t believe in or support any law discriminating against anybody, ever. But I will be at … J.C.!’â€—”S.U.!â€ the audience exuberantly criedÂ out in response.

She also said that when her long-time partner Stedman Graham, who wears a size 15 shoe, realized he’d packed only one shoe for JCSU’s commencement, she called a friend for help, reported ESPN.

“[He] managed to get his heel in Cam’s shoe,â€ Winfrey reportedly told the crowd. “So he is standing in Cam Newton’s shoes this morning.â€

Winfrey proclaimed, “From that day forward, that became my mantra, and I’ve tried in everything I do to be excellent.â€

She added, “‘Cause even if you flippin’ fries at McDonald’s, if you are excellent, everybody wants to be in your line. Whatever you do that is excellent, people notice you and they talk about you and they say, ‘Did you see that girl over there?’â€

She also stated, “Every stumble is not a fall, and every fall does not mean failure.â€

This post was written Tommy G. Meade Jr., editor-in-chief of HBCU Buzz, where it was originally published. A journalist, writer, and blogger, Meade is a graduate of Central State University and a member of Iota Phi Theta Fraternity Inc. He is based in Ohio.

Have a Great Idea for a Tech Hardware Product? This Accelerator Program Wants to Give You $75,000