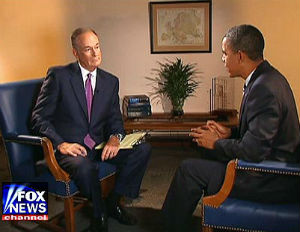 Bill O’Reilly said on his Fox News show last night that President Obama doesn’t like half the United States because blacks have a grievance against whites, according to Raw Story.

“I look at Barack Obama and think, you know, I don’t sense he likes half this country,â€ Dennis Miller, the comedian and conservative radio host, told O’Reilly. “And I think that’s coming back to bite him in the tookus.â€

“Do you think it has anything to do with grievance?â€ O’Reilly wondered. “Because in some African-American communities there is a grievance against whites who aren’t sympathetic to their cause. And that may be driving a little bit of it. So there are some African Americans who believe the reason that they’re not prospering as a community, alright, is because society hasn’t done enough, and the reason society hasn’t done enough is because of rich white guys.â€

Both O’Reilly and Miller’s come six weeks after Mitt Romney, the Republican nominee, was famously caught on tape saying that 47 percent of Americans would never vote for him because they don’t want to “take responsibility for their lives.”