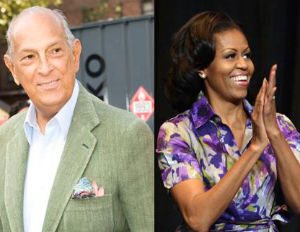 Fashion designer Oscar de la Renta weighed on First Lady Michelle Obama’s fashion during an event in Mexico. Addressing his poor relationship with Mrs. Obama, de la Renta said that the first lady does not influence fashion but rather,Â “An anonymous woman on the street is the woman who influences fashion today, not a movie star or a first lady.â€

The fashion designer is known for criticizing Obama for wearing a cardigan during her first visit with Queen Elizabeth II in 2009. De la Renta has famously dressed former first ladies Laura Bush and Hillary Clinton, but has not been tapped by Obama, who has instead gone in the direction of more young, upcoming fashion designers.

De la Renta says he expects his relationship with the first lady to end the same way it started: “poorly.”