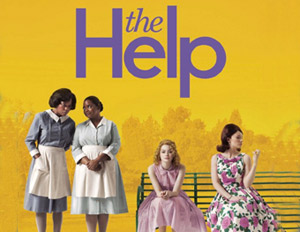 First, a disclaimer: I did not read the book, The Help. I heard all about Kathryn Stockett‘s compelling narrative offering the perspective of Black maids in the south in their own distinctive dialect. I ran out and bought it, opened it and began it, and then I came screeching to a halt.

I tried to get through it, mainly because so many friends whose opinions I respected and admired, loved it, and because it promptly became a bestseller–an actual force in the book industry–so I was curious as to what all the fuss was about. But I finally put it down for good. Why? Because I was never in the mood to put my head into that time and place; because I had to make too much of an effort to get into the maids’ so-called “dialect;â€ and because some better offer always seemed to come along.

Confession No. 2: I went to see The Help at a movie theater in the ‘hood, where I could sit with nothing but us so I could get a feel for our reaction in protected quarters. It’s clear that a larger audience has embraced this movie (to the tune of $28 million and counting), as it did the book. But, having read some of the controversy regarding our particularly visceral reactions to the film, I was eager to see that reaction firsthand.

So, what was the reaction in my theater in the Bronx? It was all… good: A few tears, smiles, and applause that rolled with the credits and lasted for quite a while. When’s the last time you heard that in a movie theater?

What was all the clapping for? Incredible performances, for one. Viola Davis, who plays the main Black character, Aibileen, is a wonder to watch on screen and stage. If Meryl Streep is the Holy Grail for actresses in this country, Davis is right there with her. In a scene they did together in the movie Doubt, Davis, playing a small role to Streep’s starring one, stole it away. In this film, Davis is the star and she is phenomenal.

But so is Octavia Spencer, as her best friend Minny. This character has taken some hits for being an eye-rolling, joke-cracking stereotype, but anyone who has charged Spencer’s Minny with that has missed half the movie and all of her touching, nuanced performance. When the Oscar nominations are announced next year, both women’s names should be called. If they’re not, that may be the time to accuse Hollywood of racism! (Oscar-worthy kudos also go to costume designer Sharen Davis, whose own grandmother was a domestic in Louisiana.)