4 Career Lessons from the Oscars 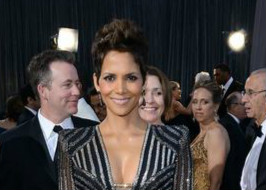 Halle Berry on the red carpet at the Academy Awards (Image: File)

Whether you stayed up last night rooting for your favorite movies and actors or gawking at host Seth McFarlene’s shocking jokes, watching the Oscars could actually have a positive effect on your professional life. While we watched Jennifer Hudson belt out “You’re Going to Love Meâ€, Michelle Obama announce ‘Best Picture’ and actress Jennifer Lawerence tumble up the stairs, there were some serious career lessons that emerged from this glam-filled event. Check out these 4 valuable career lessons:

Awesome public speaking skills go a long way.
It all comes down to the old adage, practice makes perfect. Whether you are representing your company at a conference, spearheading a department meeting or just speaking to couple of your peers, it’s important to rehearse what you’re going to say and to feel confident. It’s also important to research and know your audience. This year’s host, Seth MacFarlane, is being criticized for telling racist, sexist and all around shaky jokes. If you’re unsure of the audience you should err on the side of caution.

Take advantage of who’s in the room.
When in a professional setting, it’s important to take the time to network. Introduce yourself to company veterans as well as office newbies. Arm yourself with questions and compliments. This works well at conferences as well as at black tie events. Tweet about it. Take pictures. Use the platform to build your social media audience as well as your online presence.

Smile in the face of defeat.
The average Oscar winning actor has failed hundreds, if not thousands of auditions on their way to receiving the ultimate golden trophy. For those on a job hunt, setbacks and rejection may be inevitable. However, it’s how you deal with those rejections that can prepare you for success, resilience and leadership in your career.

Share the credit and be the team player.
From managers and mentors to coworkers and support staff, it’s imperative not to forget the people who have helped you become successful. During his acceptance speech, Christoph Waltz, from “Django Unchainedâ€ gave a special thanks to Quentin Tarantino, the film’s director, saying “you climbed the mountain…because you were not afraid.â€

What other career takeaways could be taken from the Oscars? #SoundOff and follow Jamie on Twitter @JayNHarrison.