This Week on Our World: Join Us As We Celebrate Our Landmark 100th Show!

For the past five years Our World with Black Enterprise has covered groundbreaking stories, reported triumphs and tragedies in the Black community, debated current affairs, and featured A-List celebrities.Â  Join host Marc Lamont Hill for a fascinating review of the issues, people and topics covered in a way not duplicated by any other show on television, as we celebrate the landmark 100th episode of Our World.

The 100th episode recaps topics including Hurricane Katrina, the earthquake in Haiti, the fight to stop the violence in our communities, and the battle for American education reform. We also revisit fascinating interviews with Hollywood box-office stars, hit-making recording artists and movers and shakers in politic–including President Barack Obama, who first announced his White House ambitions on the show as a U.S. senator.

CLICK HERE for our behind the scenes photo gallery from the 100th episode. 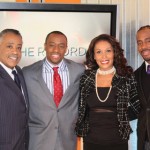