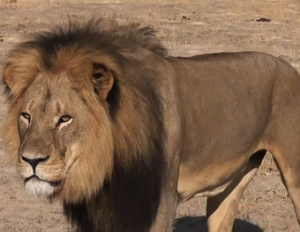 The Internet is ablaze over the death surrounding ‘Cecil the Lion,’ a mainstay of Zimbabwe’sÂ Hwange National Park and part of a research project at Oxford University.

According to CNN, Theo Bronchorst andÂ Honest Trymore Ndlovu, bothÂ Zimbabweans, are believed to have illegally hunted and killed 13-year-old Cecil during a time span of 40 hours. CNN also reports that Walter J. Palmer, an American dentist from Minnesota, allegedly paidÂ $50,000 for the hunt, which has unleashed a storm of criticism against him from the online community; particularly Facebook and Twitter, with retweets of hashtags like #CatLivesMatter, a wordplay on #BlackLives Matter, andÂ “WE ARE CECIL,â€ according to The New York Times.

[Related: Police Brutality Also an Issue for Women of Color]

The unanimous outrage over Cecil’s death and celebrity support of movements against animal cruelty, including Jimmy Kimmel— who fought back tears talking about Cecil— Ricky Gervais, Sharon Osborne and others, is leaving some people wondering why more public, high-profile figures aren’t expressing the same degree of concern for the unlawful arrests and racism directed toward African American men and women.

Why are celebrities more eager to speak out against animal mistreatment than they are about issues of racial and social injustice?

Howard Bergman, CEO of Fifteen Minutes Public Relations, toldÂ USA Today that “Animal activism has always been a staple of Hollywood activism, it’s really in the DNA.” Â Adding, “Celebrities have found when they step into some of the race issues, they’ve gotten their hands slapped for perceived insensitivity, even when they were trying to do and say the right thing. They realize that animal activism isÂ a win-win. In most cases, nobody objects and particularly in this specific case.”

Is it easier to care about animals than human beings? Here’s some of what Twitter had to say:

“Cecil the Lion more of a national tragedy than Sandra Bland to some.” – #RememberSandraBland @PercivalPenman

“The Gospel teaches us that we should be more upset about the death of #SandraBland, than tragedy with Cecil the lion” – BJ Thompson @bj116

“I really hate that the Lion died. it upsets me, but people that have so much to say about Cecil were silent about #SandraBland smh.” – @BrittneyTrill