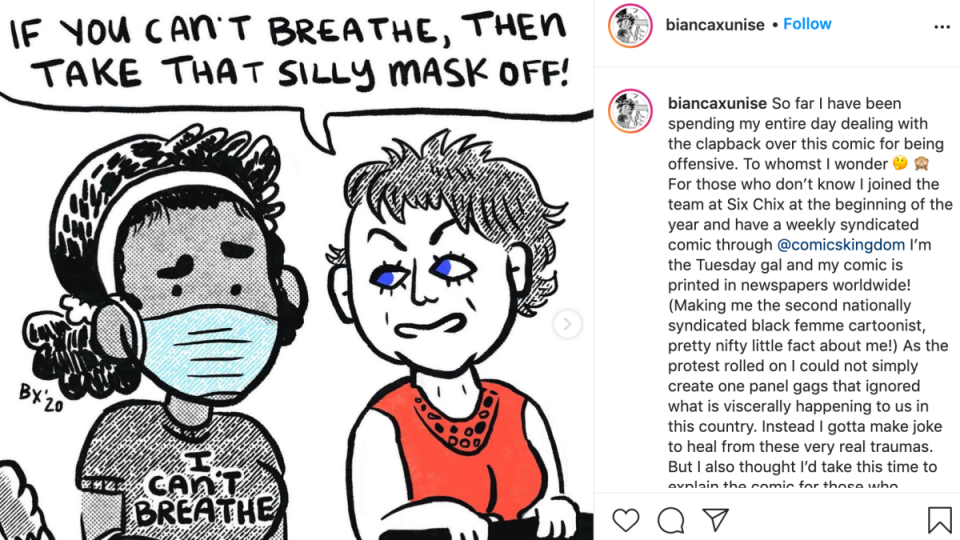 A comic panel was removed from several newspapers after readers called the cartoon “inappropriate and offensive.”

The image in question depicted two women at a grocery store, one Black wearing a face mask and a shirt that read, “I can’t breathe.” The other, a white woman with blue eyes, told the Black woman, “If you can’t breathe, then take that silly mask off!”

Here it is, the comic that launched 1000 angry responses. Please clap pic.twitter.com/Cy42h8mlMB

Tea Fougner, editorial director at King Features, the comic strip’s syndicate, confirmed to NBC News the complaints about the strip resulted in some newspapers dropping Six Chix from publication entirely. Fougner also confirmed an apology was printed at an undisclosed newspaper in the comic’s usual spot later in the week.

Six Chix is a collaborative comic strip that’s been syndicated daily to more than 120 newspapers, focusing on a broad range of topics from a woman’s perspective. The group features a rotating team of female cartoonists, including Bianca Xunise, who penned the cartoon and was the first Black woman to join Six Chix. Xunise also posted the apology on her Instagram page saying the apology was printed without her consent and said she stands by the drawing.

Fougner, along with Xunise’s colleagues at Six Chix, defended her and the cartoon.

“Bianca created the July 28, 2020, Six Chix cartoon to be a joke commenting on how Black issues are often disregarded as a personal problem and not a systemic issue,” Fougner told NBC. “She is shedding light on two pandemics right now: one on race and another on COVID-19, and both are not being taken seriously while they are destroying lives.”

Xunise also defended her actions, saying the comic went through two checkpoints: one with her editors and another with the newspaper editors that made the final decision to publish it.

“The editors at whatever newspaper it lands at should’ve read the comics and flagged it if they got offended,” Xunise said. “I’m just an artist; that’s your job.”

After the backlash, Xunise and her team discussed the situation with each newspaper that pulled the comic due to complaints.

“We spent due diligence explaining the ‘hard to grasp’ satire,” Xunise said. “Please stop giving the benefit of the doubt to people who silence Black voices.”