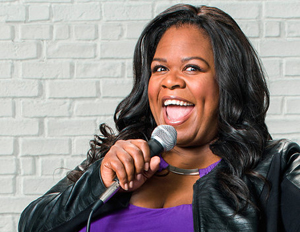 Though challenges still exist in terms of equality in pay and advancement for female professionals, it’s undeniable that there has been a tidal wave of winning on the big and small screens. From viral pop character Cookie (played by Oscar-nominated actress Taraji P. Henson on Empire), to the addition of LaKendra Tookes, Sasheer Zamata and Leslie Jones to SNL, to the more than golden touch of filmmakers, writers and producers like Shonda Rhimes, Mara Brock Akil and Ava DuVernay, women are staking their claim on the market and showing they have the power to garner popularity and ratings.

Enter Oxygen’s “Funny Girls,” a series premiering April 7, that looks like it will provide yet another platform for women to showcase the power of the female funny bone.

[BELOW: Watch Get to Know Yamaneika Saunders]

The series follows the professional and personal lives of comedians in Los Angeles, who are climbing their way to the top of the stand-up ladder. Varying in experience, ethnicity and years on the circuit, they each share a passion to pursue their dreams of showing that women can not only stomp with the big comic dogs, but dominate the room and steal the show. While working day jobs to pay the bills and hustling to get on the open mic at night, they hone their skills while being mentored by industry vets including Margaret Cho (Face/Off, 30 Rock), Loni Love (The Real), Janeane Garofalo (Girlfriends Guide to Divorce, West Wing) and Horatio Sanz, who will appear as guest stars.

BlackEnterprise.com recently caught up with one of the show’s stars, Yamaneika Saunders (@yamaneika), at a special kick-off event at the infamous Gotham Comedy Club in New York City. Hosted by Parks & Recreation star Retta, the stand-up show offered a glimpse into the cast and their comic styles. Saunders, who was a semi-finalist on Last Comic Standing, and has worked with heavyweights including Paul Mooney and Caroline Rhea, closed the show with bang, leaving the whole room in shock—and stiches.

Let’s get into a bit more about you. How did you come to be on the Funny Girls show?

I’m originally from Maryland, and I started doing comedy in Los Angeles. I moved there when I was 15 to attend the Los Angeles County School for the Arts and studied theater. I had a connection with someone who was working with Oxygen and they said, ‘We have a project that would be great for you.’

I was instantly excited about the idea of women coming together as comics. I thought it was such a fresh idea, and I was excited to see what we could bring to the screen.

In Hollywood, there’s been talk, with addition and popularity of black female comedians and characters on hit TV shows, that it may be a pop anomaly or just a trend. What’s your take on that?

People think its a trend because it’s something that is new to them because they weren’t looking at it, but we’ve always been here like, “Hello! Hi! We’re here. Hello!”

I’m glad that there is an opportunity now where black women are being showcased. But [what] I think is disheartening is when people say, ‘These people are getting an opportunity because they’re looking for black women now,’ almost as if they’re just throwing opportunities to women who don’t deserve it.

There are wonderful women are on this tour … Some of us have been on the circuit for years. I hope that more people know after seeing the tour that we have something great to offer and we’re great comics—period.

What advice has been key in your longevity and commitment to continue to pursue a career as a comic in the business?

One of the things I was told by [comedian and film actor] Patrice O’neal is to continue doing what you [uniquely] do. If you have that feeling that you know this is something you should be doing and this is where you need to be, just stick with it. The things that can really change the world are the things that are the hardest to do. A lot of people are not going to be on your side when you try to venture out and do something different, so stay strong.