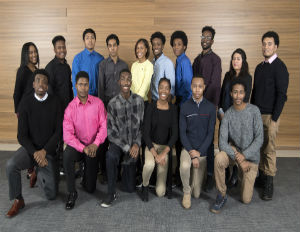 P-TECH–the network of six-year high schools whose graduates leave school with a free associate degree, business mentors, and years of practical workplace experience, as well as a diploma–is the educational model that is taking over the world.

Providing career-focused technical education and an academic program aligned with the needs of high-paying STEM employers, the P-TECH model has already graduated more than 50 students–including 16 graduating this month–since opening with a single high school in Brooklyn, New York, in 2011. All 50 graduates completed the six-year course of study ahead of schedule.

Some of those graduates have been hired at IBM, working in what IBM’s CEO Ginni Rometty has called “new-collarâ€ jobs–skilled positions that don’t necessarily require a college degree.

The majority of P-TECH graduates, however, are pursuing bachelor’s degrees in STEM.

Stanley Litow, IBM’s vice president of Corporate Citizenship and Corporate Affairs and president of the IBM Foundation, said in a statement, “The new economy requires us to equip our nation’s students with skills to succeed in college and new-collar jobs, regardless of their income or zip code. P-TECH’s extraordinary early achievers, who have already earned their associate degrees, quite simply, break the mold. We are committed to grow P-TECH to address the nation’s skills crisis and prepare youth for new-collar careers. Nothing is more critical to our nation’s economic success.â€

A Model That Works

P-TECH high schools are now operating in six states, including Connecticut, Illinois, Maryland, Rhode Island, and Colorado. But, founding principal Rashid Davis is the one making sure, with the support of teachers, that the first school, in Brooklyn, fulfills its promise.

The P-TECH teacher attendance rate is 99%, tied for second highest among all New York City high schools. Davis says that student attendance is high as well.

“Here at P-TECH, we aspire to an ethos of excellence,â€ Davis told me in an e-mail. “The culture at P-TECH is one that focuses on a clear pathway from school, to college, and then career. Consequently, there is a culture that supports high achievement.â€ Davis also says that the school focuses on “mastery, not seat time.â€

The engaged teachers, clear career pathway, mentors, and paid internships all seem to add up to high achievement for P-TECH students, 96% of whom are black or Hispanic; 74% are boys and 26%, girls; more than 70% qualify for free or reduced-price lunch.