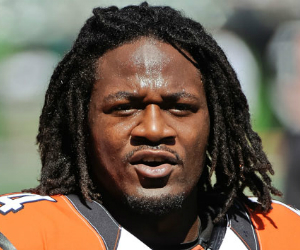 As reported at Vibe, Cincinnati Bengals football player Adam “Pacmanâ€ Jones was arrested the other night for one count of assault for slapping a female outside of a bar in Cincinnati. He was released on his own recognizance ahead of his Tuesday afternoon arraignment on the misdemeanor charge.

This isn’t the first time Jones has run afoul of the law. In 2010, after a football game, Jones was handcuffed and detained near Great American BallPark after getting in a traffic incident. He was also arrested in July 2011 for disorderly conduct while drunk outside a Cincinnati nightclub.

After his arrest, Pacman took to Twitter to defend himself, “Just got arrested for protecting myself, I will not let this break me or change what I have worked so hard for.”

His agent Peter Schaffer, also stated “he hit a woman in the face after he thought she might have thrown a beer bottle at his head.â€