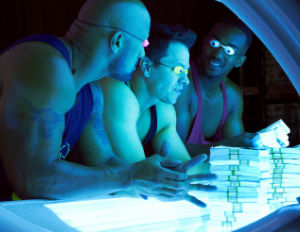 The film follows the lives of three body builders who are tired of “being kept down by people who cheated to get where they are.” So, ready to take matters into their own hands, this comedic trio sets out to kidnap and extort a man who has it all. But as no criminal masterminds, the plan quickly spins out of control.

Michael Bay brought together an A-list cast that is sure to keep crowds laughing from start to finish, especially with the actress best known as Fat Amy – real name Rebel Wilson – on the set.

Pain & Gain is slated to hit theaters nationwide April 26. Check out the trailer below.