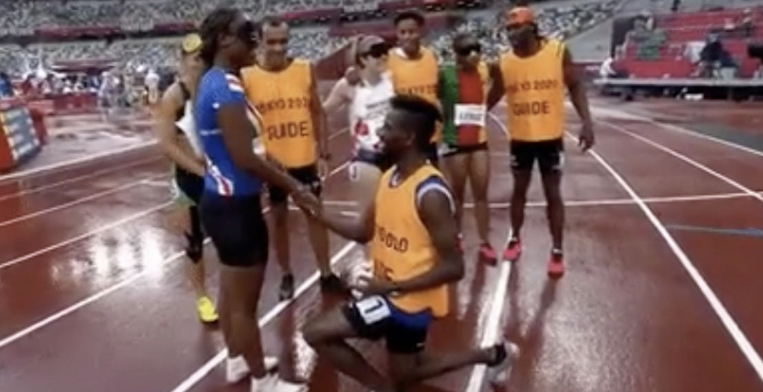 The Tokyo 2020 Paralympic Games are being held in Tokyo but instead of talking about the sporting events, everyone is replaying a touching moment between an athlete and her guide.

This, after Da Veiga got down on one knee and proposed to Semedo after her race.

Despite running a season-best 33.04, Semedo had failed to qualify for the women’s 200 meters T11 semifinals on Thursday as she finished fourth in her heat.

However, her frown was turned upside down when Da Veiga got down on one knee at the finish line and asked her to marry him.

She said yes. The proposal prompted her opponents, who all have extremely limited sight, and their respective guides to cheer and clap in celebration.

Semedo then embraced her new fiancé before flaunting her engagement ring to the cameras.

The Cape Verde duo’s engagement wasn’t the first in Tokyo this summer.

Moments after Argentine fencer María Belén Pérez Maurice was knocked out of the Tokyo Olympics in July, her coach of 17 years surprised her with a proposal.

Lucas Saucedo held up a sign behind Pérez Maurice on camera during her post-match interview with the message: “Will you marry me, please?”

Participation in the Paralympics is at an all-time high. The Tokyo games began on August 24 after the conclusion of the Olympics. More than 4,500 athletes from 163 countries are taking part and competing, making it the largest number of athletes to compete in the games at once.

Although the first Paralympic Games were played in 1948, the Paralympic Games are considered new compared to the Olympics. However, the event has evolved dramatically from its beginnings. Every four years the International Paralympic Committee (IPC) has included more athletes with a wider array of disabilities, and from a larger number of countries, playing more sports.