Why Parental Social Networking Matters at Your Childâ€™s School 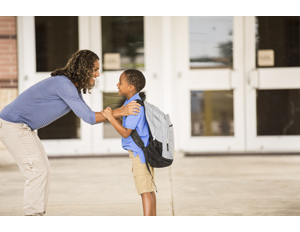 Back to school... Cute, African descent little boy holds mom's arm for reassurance on the first day of school.

So much has been written about how poverty affects the academic achievement of children, but what’s been explored much less is the critical role that parental social networking plays–in providing information, access, and opportunity to students.

I wrote a series on gifted children and, in interviewing Genevievette Walker-Lightfoot, mother of 5-year-old Giavrielle Lightfoot, I was impressed with how she understood that networking with other parents was the best way for her to find out what she called “intelâ€–the best schools, programs, and other services her child might need.

In that post, Walker-Lightfoot said that “Oftentimes minority parents aren’t a part of those networks, or don’t have access to that information. Or they don’t know that they should be advocating in that way.â€

Not Just for the Gifted

Education Week recently published an article discussing how parental social networking makes a huge difference in children’s education, whether a child is gifted or not. Parents of gifted children may be forced into the role of advocate because of their children’s unique needs, but every child benefits from having parents who assertively advocate on their behalf–and networking is a big part of that.

The article states, “…analyses by the Education Week Research Center and others show that middle-class parents often engage in more social involvement at school–participating in school committees, parent groups, and volunteering in class, for example–experiences that can link them to more opportunities and resources for their children and more influence in schools.â€

Walker-Lightfoot, who grew up attending predominantly white schools on Long Island and lived in a racially mixed community, learned about this kind of networking mainly from her friends’ parents. She’s now leveraging that knowledge and the parental assertiveness she was exposed to.

“I really learned from them what expectations to have,â€ she told me. “I learned that AP, honors, and gifted classes were expected.â€

She remembers as a youngster when the PTA took the school kids to Albany to press for including Italian in the school’s language program, which already had French, Spanish, and German.

“From the state budgetary perspective kids in the city hardly had the basics, but these Long Island parents pressed for more than the basics–they wanted exceptional resources for their kids.â€

Many people aren’t comfortable with networking for their own career furthermore to access information that could benefit their child’s education, but Walker-Lightfoot advises, “Push past the discomfort and volunteer. Talk to other parents. The reward may be access to information you wouldn’t otherwise obtain.â€

For more, check out the Family Independence Initiative, which helps low-income families learn how to navigate school.

Catch Up on All the Tea With These Great Weekend Reads

FacebookTwitterYoutube
← Stop Killing Your Book Sales! 7 Common Mistakes Self-Published Authors Should Avoid ← Catch Up on All the Tea With These Great Weekend Reads
×
'