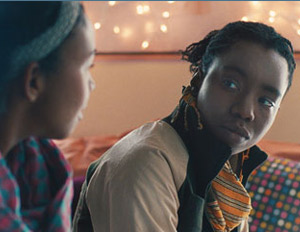 October 11th marks National Coming Out Day, an international civil awareness observance that provides the opportunity for people to “come out” to family, friends and co-workers about their sexual-orientation or gender identity. Coming out is different for everyone. Some experience fear, pain, and frustration while others find the process less difficult.

Someone who knows this all too well is Dee Rees, the writer-director of the feature film Pariah, which opens in select movie theaters in New York, Los Angeles, and San Francisco on December 28th and nationwide in January 2012. The contemporary drama is a coming-of-age story about an African-American teen named Alike, who is quietly but firmly embracing her identity as a lesbian.

Pariah is a feature length expansion of Rees’ award winning short film by the same name that was screened at the 2008 Sundance Film Festival. When she began writing the script six years ago, Rees was going through her own coming-out process.

“As I was coming into my sexuality, I started to become comfortable with who I was. But I didn’t know how to express that,â€ says the 34-year-old filmmaker.  “Some of the awe and anxiety the lead character feels were things I experienced when I was coming out, coming into this world.”

A native of Nashville, Tennessee, Rees was amazed to see teenage girls totally out and proud when she came to New York. “Even if I had figured out my sexuality at that age, I don’t know that I would have had the courage to be that person, and that is how the idea for the film came about,” she says. Not only is the film “semi-autobiographical,” the title has a personal connection. A pariah is a person without status, a rejected member of society, an outcast. It is a term Rees used to describe herself when she was coming out in her late ’20s.

Rees originally shot the script as a short while interning on the set of Spike Lee’s movie Inside Man and finishing NYU’s Graduate Film Program. Lee is among the film’s executive producers. After its world’s premier at the 2011 Sundance Film Festival, Focus Features (owned by NBC Universal) acquired the worldwide rights to Pariah, a deal which was reportedly $1 million.

Rees admits the principal conflicts in the film are similar to her own. “Parental conflict is something I really went through,” she says. “When I came out, my parents weren’t accepting.” Once they realized that she wasn’t going through a “phase,” her parents staged interventions. “For a few months, they sent emails, cards, letters and Bible verses to make me change, she says. “They felt guilty because they thought they had done something wrong; I felt guilty because I was causing so much pain.” She cut off communication, alienating herself, but eventually started talking to them again. “Things are better now.”

Coming out is called a process because it happens in stages: first there’s coming out to yourself and then it’s disclosing your sexual orientation to others. “Coming out is important, because when you hide; when you aren’t living your life truthfully, you are participating in your own disgrace,” sayes Rees.

Rees has experienced spiritual growth over the years. She has found self-acceptance and peace of mind knowing God loves her. In fact, she says that’s one element–a layer–of this film in addition to the love story and the search for identity. “If anything, it’s my spirituality that got me through the past six years. My spirituality and spiritual practice have actually gotten stronger than they were before going through this.”