Party Like a Rockstar! Inside Obama's 60th Birthday Bash 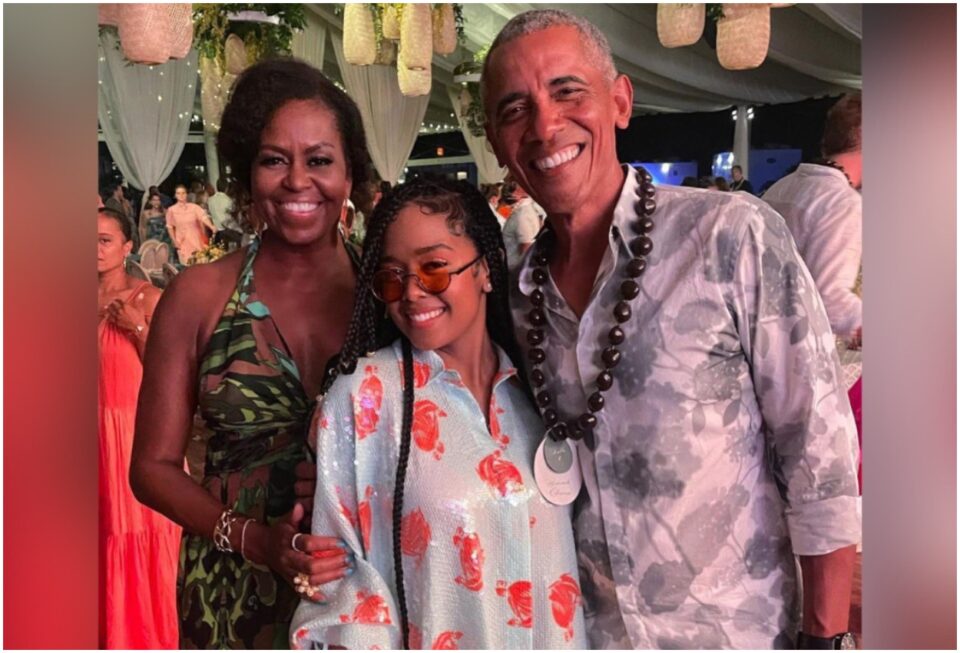 Despite reports that Barack Obama’s 60th birthday party would be down-sized due to COVID-19 concerns, the former president’s celebration went “on and on,” as guest Erykah Badu showed us.

Badu gave us an inside look at the gathering hosted at the Obamas’ $11 million Martha’s Vineyard estate on Saturday. The R&B singer posted a video of Obama dancing with singer H.E.R. on her Instagram story. With his sleeves rolled up, Obama grooved with H.E.R. for a moment before giving her a hug.

Badu can be seen being playful, sticking her tongue out, and nodding her head at the end of the video. The clip was enhanced with an electric-esque filter that appeared to shoot lasers across the screen. Other attendees in the background stand around off-stage while an MC and others dance near Obama.

Rap Alert captured the clip before they went missing from Badu’s story. They remained live until around 10 a.m. Sunday morning. By that time, the short video had been removed.

Erykah Badu and H.E.R. turning up with Barack Obama at his 60th birthday bash. pic.twitter.com/cPfBU167PT

Badu wasn’t the only one having a ball at the bash. As seen on social media, H.E.R. tweeted a photo of herself standing between Obama and former first lady Michelle. They all toted big smiles, but ultimately, the photo was deleted later Sunday morning.

Other guests rumored to be at their lavish Martha’s Vineyard estate included Jay-Z and Beyoncé, Don Cheadle, John Legend and Chrissy Teigen, Questlove, and a host of others. President Joe Biden and Oprah Winfrey didn’t make it reportedly because of COVID concerns.

It’s not clear whether posting footage of the event violated party rules or not.

According to the New York Post, rapper Trap Beckham said he had to delete everything from his social media “due to the rules.”

“It was epic for sure,” Beckham said. “If any videos surface it’s going viral. He danced the whole time. Nobody ever seen Obama like this before.”

Photos from Beckham’s Instagram showed shrimp plated with rice, greens, and potatoes. He also snapped pics of his badge, custom napkins, and the people socializing outdoors.