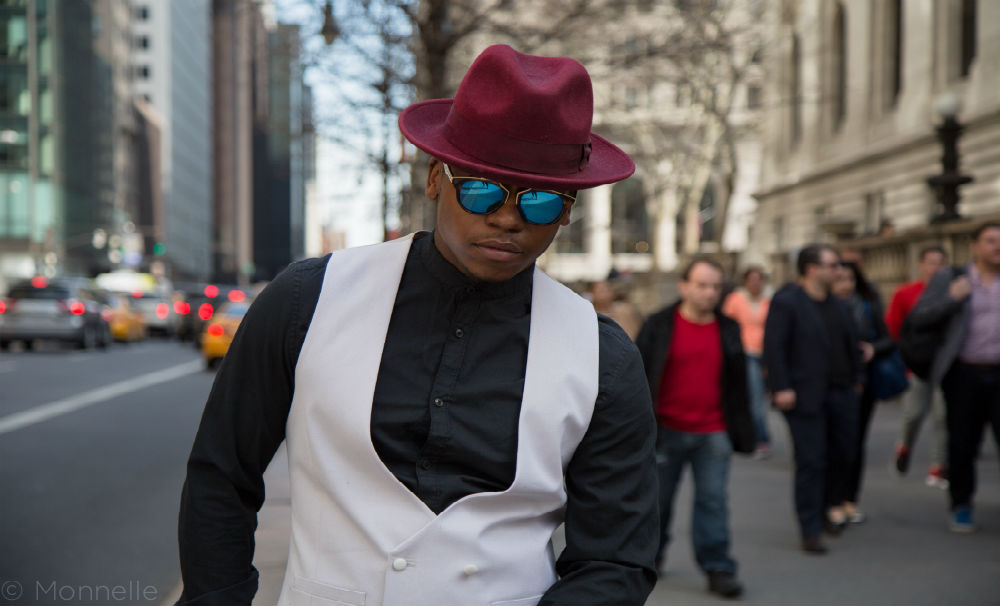 I have changed/contributed to my industry by: Remaining humble and constantly striving to be better than I was yesterday.

Born and raised in the South Bronx, DJ Sweat is familiar with the evolution of sound in his musical borough. During the golden era of hip-hop, The Boogie Down hosted a slew of rising talent including Kurtis Blow, Slick Rick, Nas, and Sean Combs who polished their chops and dabbled in all aspects of hip-hop from rhyming to scratching to breaking and fashion. Fast forward a few decades later and the mecca of wordsmiths is still thriving and producing up-and-coming talents like DJ Sweat. Like most entertainers, he grew up “surrounded by music in different forms from playing the drums and singing in the neighborhood church choir to being drum major in his high school marching band.” But it’s more than just the music: it was a higher calling, a way of life. I started off as a professional commercial dancer and I still am. I made many connections through tours, commercials, TV appearances,” he tells BE Modern Man.

Now everyone knows the DJ is the heartbeat of the party and it’s his or her job to bring the joy and the pain to the masses. Since the art of DJing is rooted in Khemet (Africa), it is only fair that every song feature a hypnotic bass and leave everyone sweating and longing for more. DJ Sweat has you covered, compiling a playlist that works for every backyard barbecue, boat ride, or weekend club turn up. His selects? “Work” by Rihanna, “Fever” by Vybez Kartel, “Like Ah Boss” by Machel Montano, “Into You” by Arianna Grande, and any reggae or trap music works as well.”

Having attended a fashion industry party a few weeks ago, I can vouch for the effect DJ Sweat has on a crowd. To command and control a room takes talent and garners much respect. To see him in his element is breathtaking. But this was all in a day’s work. A fixture on the celebrity party circuit, DJ Sweat is a crowd pleaser. “My natural love is for music and dance,” he says. “I am influenced by many: DJ Jazzy Jeff, DJ Envy, Prostyle, Avicii, Tiesto and so many more.” But beyond the music you notice his consistent and impeccable sense of style. A sartorial savant, DJ Sweat is always fashionable and camera ready. It’s what separates him from his peers. “I am a cross blend between Harlem Renaissance and James Bond. I rely on Zara and Brooks Brothers as some of the best brands I depend on. His fashion must-haves? “My hat!! My fedora is a must! Then of course my watch, pocket square, money clip, and my cane.”

Dressing dapperly is a part of  DJ Sweat’s persona, but he aims to change the way we are viewed not only in the media, who paints a brutal and savage portrait of black men, but within our own communities. He plans to “To provide an image, an idea of pure hard work, dedication, faith, and style. “I’m an uncommon man and it is my right to be uncommon.”

Which is one of the reasons Sweat is able to navigate and break through the static in life and business. His story is vital, not just for the younger generation, but to keep the current narrative on path and continue the progress created by our forefathers.

DJ Sweat seeks to “motivate others, letting them know that anything is possible and providing everyone with a great time.”

In an industry where DJs tend to outlast the MCs and everyone, including celebrities, have dubbed themselves music mixers, Sweat strives to be the best he can be. “When you want to succeed as bad as you want to breathe, then you’ll be successful. It’s possible, just be relentless!”

Which makes this honor even more significant in his life. Being named a BE Modern Man means being inducted into a fraternal brotherhood whose influence lives beyond popular culture. Always looking forward, Sweat says,“BE Modern Man means be present, stay ready, be the quiet elephant in the room and above all look your best.”

And what’s next on the checklist? “Personally finding faith and patience with God. Professionally, touring in the U.K. and Japan. Continuing to keep my look sharp and  clean, and to be as creative as possible when I’m mixing. I want to play at the 40/40 Club and a few upscale clubs around the world, especially Vegas,” he says.

The Black Enterprise team salutes DJ Sweat for elevating and preserving the true art of creating music within the industry. We look forward to hearing more about his work on stage and in the community, while helping to position today’s youth as a future BE Modern Men.