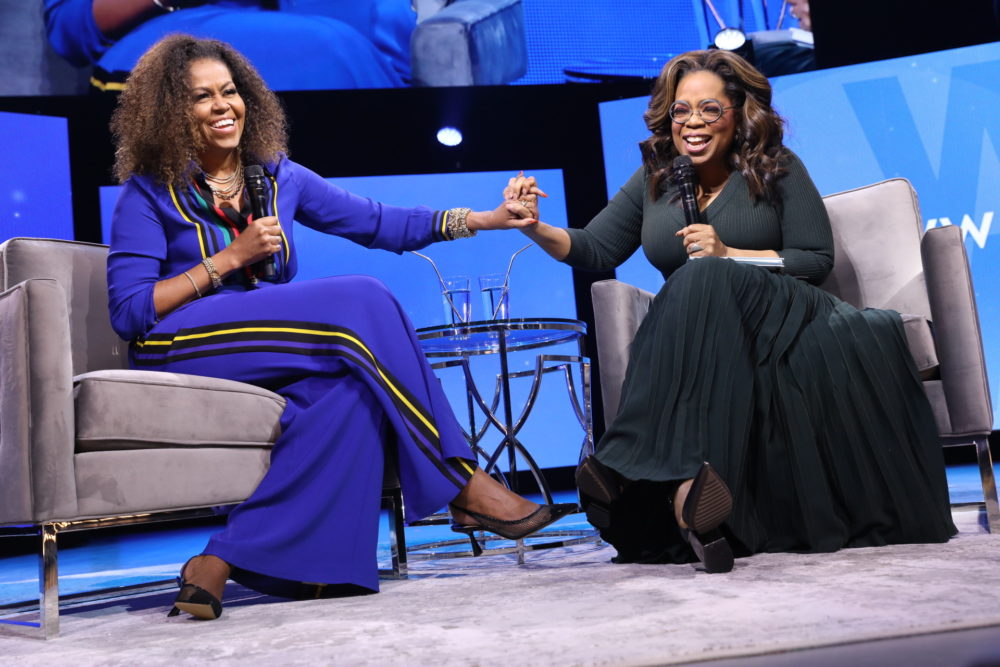 The star power at “Oprah’s 2020 Vision: Your Life in Focus” national tour stop at the Barclays Center in Brooklyn, New York, last weekend was undeniable—both on and off stage. Lupita Nyong’o, Niecy Nash, Hoda Kotb, and Gayle King were just some of the notables within the sold-out crowd of 15,000 people who paid between $70 and $300 for a ticket. However, those weren’t the only celebrities who spent their Saturday at Winfrey’s full-day wellness event. There was just as much A-list (and C-suite) action going on behind the scenes.

“Hello, Brooklyn!” roared the media mogul as she welcomed a sea of feverish fans, some who lined up as early as 8 a.m. to enter the arena. “We’re in New York City! If we can just make it here, I know we can make it anywhere!” she continued over loud applause and cheers.

Winfrey kicked off her nine-city tour presented by WW (Weight Watchers Reimagined) in January, featuring superstars like Lady Gaga and Dwayne “The Rock” Johnson. On Saturday, the event, which was headlined by former first lady Michelle Obama, opened with a dance party followed by a performance from Grammy-winning gospel singer and WW Ambassador Tamela Mann. Afterward, the self-help guru opened up about her personal wellness journey during a nearly hour-long presentation where she emphasized the importance of maintaining a balance of good health and peace even in the midst of chaos.

“All things in balance does not mean all things are equal or all things are in peace at all times. I ain’t have no peace this week,” Winfrey quipped the day after she became emotional on NBC’s Today while defending her friend Gayle King who’s under fire for her controversial interview with Lisa Leslie. “Balance means you welcome the constant shifting flow in your life. And just like the waves in the ocean, you know life is always flowing,” she told the Brooklyn audience.

Meanwhile, watching from the Barclays owner’s suite was legendary singer Patti Labelle, who noted that even at “75 years young,” she still learned a lot at the event. “Oprah’s thoughts are everybody’s thoughts, but when she says it, she says it in a way that you might understand it better,” LaBelle told BLACK ENTERPRISE. “She opens minds and hearts.”

LaBelle was joined in the suite by media tycoon Cathy Hughes, the founder of Urban One (formerly Radio One). For her, the 2020 Vision tour was an opportunity to spend quality time with her girlfriends while watching a candid discussion between “the two most powerful black women in America.”

After a dance exercise from choreographer Julianne Hough, a mediation session, and a WW-sponsored lunch, it was time for the main event. Obama took the stage for a much-anticipated fireside chat with Winfrey. The two friends started the conversation laughing about the last time Obama was at the Barclays to promote her book Becoming back in December 2018.

“Does this feel like déjà vu for you? Because you were here wearing those bad Balenciaga gold boots!” Winfrey said in reference to the head-turning thigh-high sparkling gold boots Obama wore.

“Barack is like, ‘Where are those boots?’” Obama responded. “I was like, ‘They’re put away, honey. Just settle down.’”

Although former President Barack Obama was one of the main topics during their wide-ranging, hourlong chat, she also shared intimate stories about her children, touched on her time in the White House, and talked about being an empty-nester—a reality that hit her and her husband harder than they expected when they dropped their 18-year-old daughter, Sasha, to college last fall.

“Not everyone likes me,” said Obama. “Some people think I’m the devil incarnated.

“We tried to hold it together, to get (Sasha) in the car so she wouldn’t start crying, and then me and Barack, we bawled like little babies,” Obama admitted. “Barack gets that ugly, loud cry,” Obama said, imitating his cry and earning laughs from the crowd.

“He did that at Malia’s graduation,” she added. “We’re sitting there, and he had his glasses on and speeches are happening and we’re all chatting, and we hear,” she said, mimicking his cry again with a laugh. “And I’m looking at him like, ‘Are you OK?’” she recalled. “He’s going to kill me for telling this story.”

When Winfrey asked if the energy in their home was different now that both of their daughters are gone, Obama exclaimed: “It is so good, y’all,” before playfully chastising the audience. “OK, you guys, get out of the gutter!”

“I’m a black woman in America and we’re not always made to feel beautiful.”

Obama went on to talk about the criticism she received as a public figure. “Not everyone likes me,” she said. “Some people think I’m the devil incarnated. When you’re in politics, you get the good and the venom, too,” she continued. “People called me all kinds of things when I was campaigning for Barack; when it was a competition. They called me un-American. This stuff sticks with you. Men talked about the size of my butt. People were telling me I was angry. That stuff hurts.” She added, “I’m a black woman in America and we’re not always made to feel beautiful.”

Although the best-selling author shied away from getting too political, she reminded the audience about the importance of civic engagement.

The conversation turned slightly political, again, when Winfrey asked her about her own 2020 goals and vision.

“President!” yelled someone from the audience members, while others screamed, “White House!”

The 56-year-old Harvard and Princeton alum dismissed the cries and said she is aiming to empower the “next generation of leaders.”

“To help them understand a broader sense of values that they can operate within because I do think that we are short on that right now, that our leaders are not paving a good path for what we want our kids to be,” she explained. “I’m sorry to say that. I don’t want to make this political in any way.”

Michelle Richburg, the president and CEO of Richburg Enterprises L.L.C. was visibly moved by Obama’s session. “Oh my God, she was incredible, so inspiring! Her authenticity is what speaks to me,” she said.

This, however, wasn’t her first time seeing Winfrey. Back in 2014, Richburg attended Winfrey’s “Live Your Best Life” tour, which ultimately changed her life. “I literally quit my job, started my company. We’re celebrating, five years now and to be here today, five years later, was like a refresher.” She said the 2020 Vision tour gave her the ammunition to stay in business for five more years.

Beyond the “once-in-a-lifetime opportunity to be in the presence of Oprah Winfrey,” Keia Clarke, the chief operating officer for the WNBA’s New York Liberty, said attending the 2020 Vision tour was an opportunity to connect with other women leaders. “I think the energy in the room and just the celebratory feeling with all these women…has just been incredible.”

Although Ayiko Broyard, the EVP Group Account Director at Walter Isaacson, attended the 2020 Vision tour stop in Atlanta last month, she says seeing Winfrey at the Barclays Center was a “powerful reinforcement” of the lessons she shared.

“The experience, for me, is one of confirmation,” she said. “You have an inner voice that sometimes you don’t listen to. And I think [Oprah] is actually teaching people how to access it and use it to be able to do whatever it is that they want to do.”

Rather than being about weight loss, Broyard says the 2020 Vision tour is about wholeness—a key marketing strategy that WW embraced after Winfrey purchased a stake in the company in 2015 and became the face of the brand.

“A lot of people think that when they see Weight Watchers 2020 Vision tour they think it’s going to be all about how to lose weight,” she said. “They’ve created an experience that is not necessarily all about pounds and weight. It’s about understanding why you want to do whatever it is that you want to do, setting a goal, [and] putting things in practice for the goal.”

Also present in the owner’s suite was Maurice Stinnett, who made history in 2018 as the first black man to be appointed as a diversity and inclusion vice president for an NBA team with BSE Global, the organization that oversees programming and operations for the Barclays Center and the Brooklyn Nets. For him, attending the 2020 Vision tour was more than a day at work. It was an opportunity to facilitate connections between LaBelle, Hughes, and a collective of powerful black women as he continues to focus on cultivating diversity and inclusion at the Barclays Center.

“When I found out that Michelle and Oprah were coming to town, I thought this might be a cool opportunity to curate a group of…women of color executives and employees throughout the organization,” he said, “and bring them in a suite with our ownership and let them learn from not only Michelle Obama and Oprah, but I wanted to bring two tangible living legend black women who have blazed the trail in music and entertainment and corporate America.”

That was an offer Hughes couldn’t refuse.

“He had the hottest ticket in town and so it was easy to say yes,” Hughes said. “And when he told me that Patti was also coming—when you work in the entertainment [industry] like Patti and I both do, it’s hard sometimes just to spend girlfriend time. So the day is special,” she said. “I really appreciate Maurice for reaching out.”

Following the event, Stinnett told BE that he was glad that his guests left the Barclays feeling full.

“Everybody was just extremely empowered, uplifted, and encouraged,” he said. “My role, No. 1, is to ensure that we have a diverse and inclusive organization but [No. 2] is building an inclusive culture and you do that by building an inclusive instinct within the individuals.” He added that part of his goal is to ensure women of color are whole and healthy in the spirt of Winfrey’s wellness and wholeness message.

“When you’re a healthy, whole person, you’re not threatened by someone else being healthy and whole included at the table,” he said.