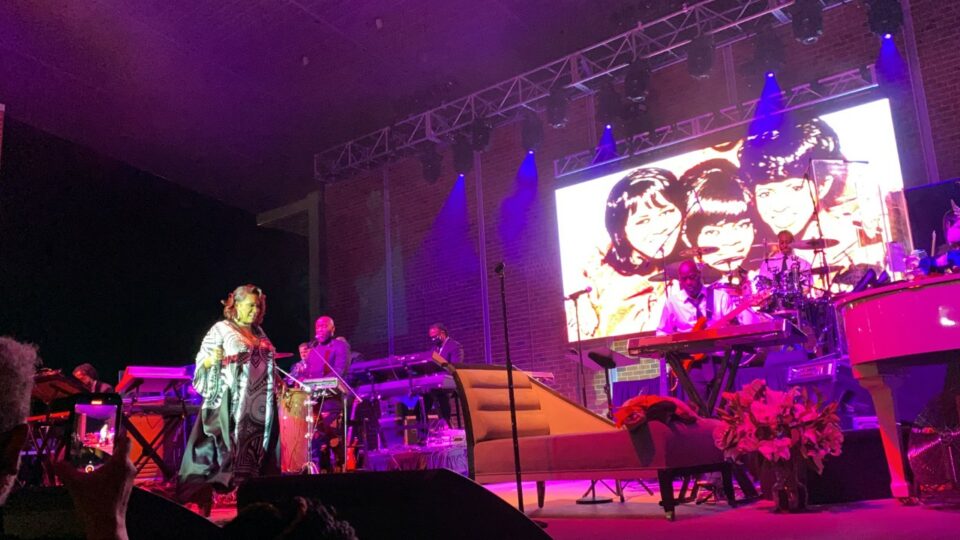 Labelle and Knight rocked the night and had fans up on their feet in the 3,200-seat facility, singing along with the legendary divas — from Labelle’s powerful “Over the Rainbow” rendition to Knight’s crooning of “Midnight Train to Georgia,” a cult-classic that is undoubtedly her hometown anthem.

But it was a tender moment from Labelle who spoke candidly about losing Dash so suddenly, that had fans wiping away tears too. Dash who was a former member of the Bluebelles in 1962 which changed later to Patti LaBelle and the Bluebelles,  passed away on Sept. 20 at the age of 76 just days after Labelle gave Dash her flowers on stage at a concert after singing together.

Labelle said Gladys Knight has been helping her grieve through the loss of Dash and “several other family members,” she’s lost.

“Gladys has been in the back with me praying. I was with her when she lost members of the Pips,” she said through tears and her voice trembling. “So now we’ve lost a Labelle. God bless Sarah Dash.”

She admitted that Gladys Knight has given her a shoulder to lean on through the tears and said she’s been there and even prayed with her before she hit the stage.

Labelle then sang a tribute to Dash as a video tribute played in the background, flashing across the screen years of photo memories of the singers decked out in elaborate costumes and exotic looks that became the hallmark of the group.

The critically-acclaimed Godmother of Soul who hails from Philadelphia, and Knight, the Empress of Soul who hails from Atlanta, have been fast friends for decades. The two recently made headlines teaming up for a Verzuz battle that was less battle and more of a sisterhood and lovefest because, “we don’t fight,” Labelle said on stage Saturday about the  IG Live event. “We’re sisters,” she quipped.

Following the news of Dash’s death last week, Labelle said in a statement on Instagram, “We were just on stage together on Saturday and it was such a powerful and special moment. Sarah Dash was an awesomely talented, beautiful, and loving soul who blessed my life and the lives of so many others in more ways than I can say. And I could always count on her to have my back! That’s who Sarah was…a loyal friend and a voice for those who didn’t have one.”