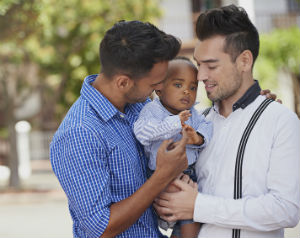 Billionaire Peter Thiel, who made his fortune co-founding PayPal and investing early on in Facebook, reportedly made history by publicly announcing to the GOP convention that he is gay.

But the announcement from Thiel, who’s openly gay, was more smoke and mirrors for the RNC. It also reinforced a narrative often seen in the media and political arena that depicts the LGBT community as wealthy, white gay men (Forbes puts his net worth at $2.7 billion). And yet, a Gallup survey revealed more people of color identify as being LGBT–one-third of U.S. adults. LGBT people of color tend to have lower incomes and suffer the most from anti-LGBT laws.

What’s more, during his acceptance speech, Trump did not say he would protect LGBT rights. He vowed to protect LGBT communities from being murdered by Islamic terrorists, referencing the massacre of LGBT people at Orlando’s Pulse Nightclub.

The reality is that the Republican Party has approved one of the most anti-LGBT platforms, complete with opposition to marriage equality and bathroom choice for transgender people, as well as an endorsement of the medically discredited practice of “conversion therapy.”

In the past, some mental health professionals resorted to extreme measures such as institutionalization, castration, and electroshock therapy to try to stop people from being lesbian, gay, bisexual, or transgender. Today, counselors use a variety of behavioral, cognitive, and psychoanalytical practices, as well as techniques that try to change or reduce same-sex attraction or alter a person’s gender identity. Children are often forced to undergo conversion therapy by their parents or legal guardians, putting them at high risk of being harmed.

Add to that the fact Indiana Gov. Mike Pence, Trump’s pick for vice president, is controversial within LGBT advocacy circles. Last year, Pence signed a so-called “religious freedom” bill that was widely perceived as a veiled attempt to usher anti-LGBT discrimination into law.

Thiel seems unfazed by such legislation, nor does he appear to care about newer measures, like North Carolina’s House Bill 2, which is specifically designed to keep transgender people out of the bathrooms that correspond with their gender identities.

“When I was a kid, the great debate was about how to defeat the Soviet Union. And we won,” he said during his address to RNC. “Now, we are told that the great debate is about who gets to use which bathroom. This is a distraction from our real problems. Who cares?” Apparently, it is advocates who continue to sound the alarm about an epidemic of deadly transphobia violence.

According to NBC, Gregory Angelo, President of pro-LGBT Log Cabin Republicans, hoped Thiel would acknowledge the historic nature of his presence as a gay man. NBC reports only two other openly gay people have addressed the GOP convention before; the last time it happened 16 years ago, delegates from Texas protested by bowing their heads in prayer.

Thiel has supported gay rights causes such as the American Foundation for Equal Rights, a nonprofit established in 2009 to support the plaintiffs in the Proposition 8 lawsuit (the Supreme Court’s ruling against Proposition 8 in 2013 again allowed the state of California to recognize same-sex unions under the law).

But Thiel is a conservative Libertarian who contributes to Republican political candidates and causes. Generally speaking, Libertarians believe in limited government and strong individual rights. Â As one pundit put it,”Let people decide what they do or do not support. Keep the government out of it.” So, if you don’t want to hire someone at your firm–black or white, male or female, Christian or Muslim–or to have homosexuals shop at your store, that’s your prerogative. Just don’t make laws that sanction bias.