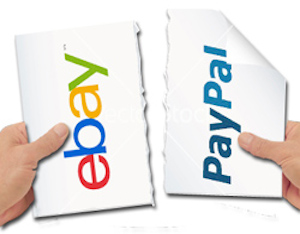 Investors have reason to applaud the changing rules of the game as PayPal, the electronic payment service, has announced that it will split off from e-commerce juggernaut eBay.

The move has been positively reflected in the market: eBay’s shares have gone up nearly 7% to $56.16 since the morning trading. Activist investor and billionaire Carl Icahn, who has a 2.5% stake in eBay, has been pressuring the e-commerce site to split off PayPal. Meanwhile, eBay’s CEO John Donahoe admitted that PayPal was the wrong move for the company. Today, eBay announced that the payment service will become a separate publicly traded company.

In 2002, eBay acquired PayPal for $1.3 billion and rapidly became the company’s fastest-growing segment. For those who haven’t used the service, PayPal would let customers use their bank accounts to make payments and money transfers without needing a check or credit or debit cards. Since its usurpation, PayPal has acquired its own share of companies like One Touch and Braintree, which are in the mobile payment arena. With Apple throwing its hat into the ring with its own digital wallet, Apple Pay, the idea is that mobile payments/transactions could grow from $1 billion (in 2013) to $58.4 billion by 2017.

“The split will give PayPal greater agility to help it achieve its full potential,” Forrester analyst Denee Carrington said. Donahoe has also announced that he will step down as eBay’s CEO and will not have a management role in either of the two companies. Dan Schulman, an executive at American Express, will become the new president at PayPal effective immediately. Devin Wenig, currently president of eBay Marketplaces, will become CEO of the new eBay Inc. The push to online transactions comes after a string of high-profile data breaches that have entangled major retailers like Home Depot and Target.