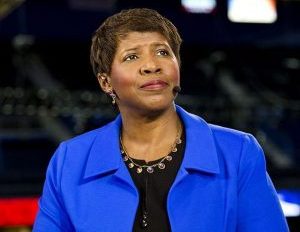 After a long battle with cancer,Â PBS NewsHour TV anchorÂ Gwen Ifill passed away on Monday at the age of 61.

Ifill served as a co-host of NewsHourÂ since 2013, along with Judy Woodruff. The veteran journalist also hostedÂ PBS’ Washington Week.Â However, ongoing health issues prevented Ifill from covering the 2016Â election last week. She also took a temporary leave of absence from the independent public network back in May.

PBS’ President and CEO Paula Kerger released a statement, describing the respected reporter as “one of America’s leading lights in journalism, and a fundamental reason public media is considered a trusted window on the world by audiences across the nation,” according to People.

Just also reflected on Ifill’s commitment to giving back and mentoring younger journalists, saying, “She was a mentor to so many across the industry and her professionalism was respected across the political spectrum. She was a journalist’s journalist and set an example for all around her.”

In 2009, Ifill authored the bestselling book,Â The Breakthrough: Politics and Race in the Age of Obama.Â She began her career in journalism working as a newspaper reporter for the Baltimore Evening SunÂ and the Boston Herald American. She then went on to work for The Washington Post andÂ The New York Times.

A number of reporters and elected officials, including Tamron Hall and Chuck Todd, expressed their grief over Ifill’s death on Twitter: