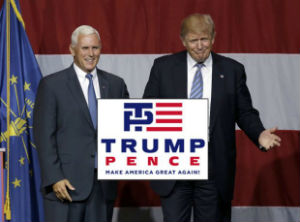 As the Republican Convention commences in Cleveland this week, I’m convinced, now more than ever, that Donald J. Trump does not want to become president of the United States. He is not interested in being the leader of the free world. He does not want to win this election.Â His selection of Indiana Governor Mike Pence as his vice presidential running mate proves it–right?

You see, campaigns are all about addition, not subtraction. They’re about building coalitions of likely voters a candidate can identify and mobilize on Election Day. Between now and then, those unfortunate souls are bombarded with campaign ads in the form of TVÂ commercials, direct mail, and digital ads on the Internet.Â The whole point of this thing, ultimately, is to win.Â Well, either Trump doesn’t get any of that, or he doesn’t really want the job, because Pence adds nothing to the ticket and actually pushes more people away from the GOP.

Let’s count it up: Trump has already alienated women, Hispanics, Muslims, African Americans, the physically disabled, and POWs. Pence has a pretty awful track record with many of the groups on that list as well, to which we can also add seniors and anyone identifying as LGBTQ. Trump is doubling down on his campaign to attract more white men–and no one else–to support the Republican ticket this fall. This is a losing formula every day of the week, especially on Election Day.

Don’t get me wrong; if this is the way Trump wants to play it, I’m all for it. Right now, Trump’s entire campaign–up to and including his recent VP selection process–reads like a script from the HBO show Veep. If I have any concerns, it’s that the Clinton campaign and her supporters will be lulled into complacency based on the Trump team’s incompetence.

But again, Trump is doing his best to make it easy for Clinton. Democrats wasted no time pouncing on Pence once his candidacy was announced, updating the disconnected and uninformed about his recent political follies.Â As a member of the GOP leadership in Congress, Pence fought and failed to defund Planned Parenthood. He also attempted to privatize and end Social Security as we know it. Last year, as governor of Indiana, he signed the infamous Religious Freedom Bill, which had everyone from Apple CEO Tim Cook to entertainers and the NCAA crying foul and threatening not to conduct business in the state. Pence later amended the bill to be less stringent, but the damage to his reputation as well as the state’s reputation had already been done. Earlier this year, Pence also signed one of the most restrictive and invasive abortion laws of any state in the nation, requiring not only a waiting period, but also a sonogram prior to the procedure.

Trump has said from early on in his campaign that he wanted to have a political insider by his side, if he actually captured the Republican nomination. The trouble for Trump and every Republican running down ballot this fall, is that while Trump personally has been all talk, Pence has actually been a man of action. While Trump talks of enacting radical, divisive policies that pull our nation further apart, Pence has actually done so at the state and federal level.

And now the new GOP standard bearer is asking us to place Pence a heartbeat away from the presidency, all to appease the DC establishment. Trump, seemingly against his will, is doubling down on the radical right, chasing votes he should have locked down during the primaries, rather than broadening his appeal with a more moderate pick.

Universal laws of mathematics tell us that a negative plus a negative equals a negative outcome. I’m betting that’s what we will have with a Trump/Pence ticket this fall. The past two elections cycles tell us, without fail, that if Trump really doesn’t want to be president, this is the way to do it.

Corey Ealons is a former White House spokesperson for President Barack Obama. He is currently a partner with VOX Global, a public affairs communications firm based in Washington, DC. Follow him on Twitter @CoreyEalons.

FacebookTwitterYoutube
← BE Modern Man: Meet the ‘Professional Groomer’ Adrian Fanus ← Neil deGrasse Tyson Opens Up About His Experiences with Police
×