Periscope is a video social media platform created, according to its founders, because “there is no better way to experience a place right now than through live video.” Its inventors call it the closest thing to ‘teleportation,’ and the platform is taking the world of sales and marketing by storm. I first heard of the platform in May from blogger and radio host, Yalanda P. Lattimore (@DryerBuzz), as she used the platform to broadcast a live panel discussion during the BloggerWeek conference.

Black Enterprise 2014 Family Business Award Finalist, Lamar Tyler of Black and Married With Kids, has been saying for years that when it comes to accessing our markets, customers, and influencers, ‘the gatekeepers are gone’ due to social media. Periscope is proving that aphorism to be true. It enables businesses to speak and interact in real time with prospective and existing customers, who are then able to share the message being broadcast with their followers on Periscope and Twitter.

Additionally, if activated by the broadcaster, viewers may write comments that the broadcaster may address in the moment. Never before have brands had direct access and the capacity to receive immediate feedback from as broad a swath of the marketplace and with as much or little regularity as the brand desires. In real time, what you’re saying can be spread to an ever-growing audience through social sharing. For viewers it’s like getting an invitation to a great party and being able to attend right away.

The immediate invite and subsequent party attendance is what’s so brilliant about Periscope. Conventional social marketing says that ‘native’ advertising will deliver the best return on investment. As businesses, we’re advised not to ‘interrupt’ consumers’ experiences as they are interacting with social media, and there’s even a ‘Native Advertising Summit‘ held annually since 2013. 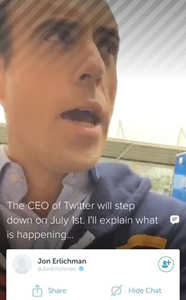 Periscope, by its very nature, interrupts viewers. When someone you follow goes live or you receive an invitation to view a live ‘scope,’ you get a notification…a cross between a bird’s chirp (possibly a cheeky nod to its owner, Twitter) and a whistle, which signals that something is happening right then. So long as the broadcaster has her saved settings turned on, people can watch the re-play for 24 hours.

However, it appears that many viewers are opting to stop whatever they are doing to watch broadcasts live. I’ve seen live viewer numbers range from 20 to 300 to 400, with John Mayer pulling in about 70,000 live views for a 10-minute guitar serenade. People are stopping whatever else they are doing to enter a different app, Periscope, and watch a broadcast. This presents a huge opportunity for businesses to be heard, seen and patronized.

Periscope was purchased by Twitter for a reported $100 million and Twitter is working hard to ensure that it is a platform that gets broadcasters as much exposure as possible. To that end, Periscope is fully integrated with Twitter, making it easy to connect with and be found by existing followers already comfortable with the Twitter platform, who can then share your content with their followers. It was apparent a few weeks back that Periscope was going to be a game-changer for how businesses interact with customers and for the manner in which news is shared. Just moments after a Twitter board meeting, journalist Jon Erlichman took to Periscope to describe the ‘step down’ of former Twitter CEO, Dick Costolo, in great detail (and responded to live-viewer questions).

Twitter just used Periscope to announce step down of CEO as of July 1st. They’re def working to make Periscope as big as Twitter…he’s answering live questions. This is disruption. Posted by Michelle Y. Talbert on Thursday, June 11, 2015

There’s already a burgeoning sense of community between broadcasters and viewers on the platform, as well. There have been a number of live ‘Peri Days’ for people from various cities across the world to meet in-person and broadcast simultaneously.

“It’s only been a few months since Periscope came out, but we’ve already seen the creation of a very active and highly engaged community on this social platform,” said Cathy Hackl, social media strategist and director of New York Scope Week. “We created this event because we listened to the community. We are looking forward to continuing to build a diverse community through our event, and build real-life connections with fellow ‘scopers’ and enthusiasts.”

The other day I watched in awe as one of my colleagues earned $1,000 in real-time payments on Periscope by selling a course that he, admittedly, had not yet created; that’s what his viewers—as members of the growing Periscope community described above and paying $97 each- were going to help him do. He completed this feat in 20 minutes.

Periscope, if used well, can be used to:

(1) Position you as an expert in your field.

(2)  Introduce you to a new audience.

(3) Give your current customers access in a fresh and new way.

(4) Provide you with a platform to make personal connections that lead to sales.

In the 1980s Tony Robbins mastered the art of the infomercial. Well, Periscope is now providing that opportunity to you. Amber Wright, The Conversation Coach said, “Periscope has been the energy boost my online presence was craving. I’ve gotten quality leads for my coaching business and [have] grown my audience with lightning speed since joining. I am ecstatic to continue using Periscope and leveraging it to impact my business and bottom-line as it matures as a platform.”

As with any new media, be intentional about how you use it. Just as easily as a brand can excel with social media, it can also fail. Although the beauty of Periscope is that you can delete a video and it will only save for 24 hours, it’s better to be proactive rather than reactive. There are some great guides and tutorials that are already floating around, as well as some interesting Periscope folks to watch. I won’t delve into the nuts and bolts and how-to’s, as I’ve included some great links below.

What I also see as a major benefit that can help you avoid the feeling of being overwhelmed as you’re faced with yet another shiny new social media object to master, is that Periscope is ripe for re-purposing your existing content. If you have blog posts, prior ads, other marketing or information that you’ve shared, you can introduce a summary of it to your Periscope audience and then direct them to the original content.

Additionally, your Periscope broadcast will provide you with new material that you may re-purpose elsewhere. So long as you have saved your video, you can:

(1)  Create 15-second snippets and share it to your Instagram page…with a call to action that the full video may be found on your Periscope profile, but ‘only for the next [X] hours.’

(2)  Save and edit, or not, the video and upload it to YouTube, Facebook, Clammr or any other audio/video platforms you use.

(3)  Share the link across your platforms, again, with the disclaimer that it will only be available for a short period of time and that your customers should follow you so they never miss a live broadcast again.

For a complete how-to guide (in print, with video tutorial) check out How To Periscope, by Alaia Williams. Here’s a small sampling of a few other great topical Periscopers to follow:

Michelle Y. Talbert is an author, recovering attorney and host of the Her Power Hustle Podcast. She is a regular contributor to Black Enterprise. She supports women as they build relationships and networks that take their careers and businesses beyond the next level, with her Her Power Platform™ Program. Click HERE for your instant access to her Social Media Quiz to find your Ideal Client, which provides the top 2 social media site choices for your business.