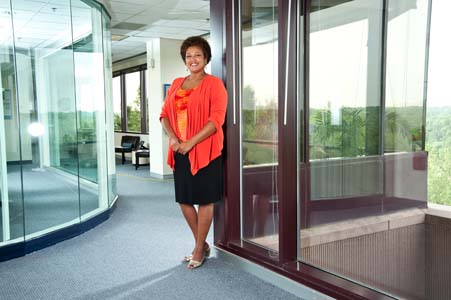 It was early in her career, but Leah Brown was doing well. At age 24, she was an engineer for New York Telephone Co. (now Verizon Communications) in New York City. She often threw elaborate parties at her uncle’s swank Upper West Side apartment. She worked hard–60-hour workweeks were the norm–so she could have the lifestyle she wanted: nights out on the town, designer clothing, and a comfortable living. It was the ’80s and life was good–until her uncle contracted HIV.

Leah’s relationship with her uncle changed from confidante and best friend to primary caregiver. In that role, she felt a growing frustration while trying to gain access to the best healthcare and pharmaceuticals for her ailing uncle. His health deteriorated rapidly and on Dec. 27, 1987, he died. The loss of her uncle, Alan Brown, was devastating. Just 16 years her senior, Alan had been there for Leah her entire life. “Through that experience, I really wanted to make an impact on the healthcare community, but with me not being a clinician, I had to find a very unique way where I could transfer my skill sets to the healthcare industry.â€

Brown, who received her law degree from the University of Kentucky, spent the next 15 years at a large consulting firm where she worked with hospitals to meet healthcare regulatory compliance issues. Though she was gaining valuable experience within the industry, she put her entrepreneurial dream on hold. “I was content with this career, but because of a reorganization I found that I was out of a job,â€ she says. “So this was the break I really needed to say, ‘OK, Leah, it’s finally time to implement what you’ve always dreamt to do.’ You know, sometimes you just have to be pushed into it.â€