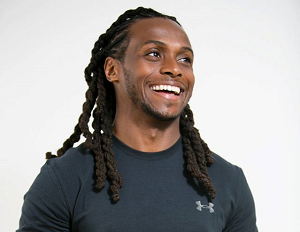 After training his wife and helping her to jump start her own fitness journey, Wilson decided to expand his services to other professional women in the New Jersey area. Now with 160 members under his belt, Wilson details his journey to starting JCF boot camp and getting professional women to live a healthier lifestyle.

[RELATED: 5 Ways My Fitbit Has Pushed Me to Become a Better Entrepreneur]

BlackEnterprise.com: How did you get your start in fitness?

Wilson: Well, sports has always been a part of my life since I was 5. I played college football at Bucknell University and after graduating in 2005 I moved back home to New Orleans. I got a job and one week later Hurricane Katrina happened and I moved to New Jersey where I got a job at the New York Stock Exchange and just wasn’t fulfilled. Corporate America was never a career for me and just always a means to an end until I found what it is I wanted to do. One day I had a co-worker read a Craigslist ad I posted [about my boot camp] and it just continued to grow from there. I left my full-time job in March 2010.

It’s a handful of guys versus 98% of women. We started in 2008 as a solution to an intimidating gym culture and equipment. Before starting the program, I was training my wife and she enjoyed it and got some great results. What I found with her was, before moving here, we worked out a few times together but she didn’t know how to work equipment. So it was building off the traditional gym setting and doing things differently than just kind of feeding the treadmill idea.

How do you incorporate a healthy lifestyle into your family life?

Earlier on, it was just my wife and I. We had the time to work out and train together, but that dynamic has obviously shifted now with three kids. So now, with my wife staying at home, it’s just a matter of creating the time to get out and do things for her. For me, it’s pretty much been the same as I work out with my boot camp and alternate with my wife to go and get my workout in.

Also, we create time at home to cook more and get the kids involved with helping out so that way the family is having dinner together most nights. We’ve created a lifestyle where we know what healthy habits are and we try to make sure we educate our kids on that.