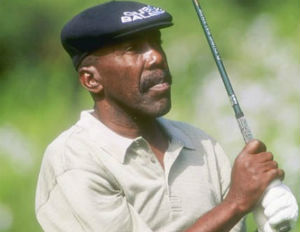 Today we celebrate the life of 71-year-old Calvin Peete, who died this morning in Atlanta, as confirmed by The PGA Tour to NPR. Calvin is survived by his wife, Pepper, and his seven children – Calvin, Dennis, Rickie, Nicole, Kalvanetta, Aisha and Aleya. In a statement released by the family to the PGA, his wife pays tribute to her husband stating, “Everyone in the family admired and loved him… He took the Peete name to another level. We are so thankful that he was in our lives as a father, husband and role model. He was a blessing, and he will be missed.â€

Calvin also leaves behind a remarkable 25 year professional golfing career that saw him win 12 PGA events, and over $3 million in tournament purses, as reported by NPR. Peete wasn’t the first African American to win a PGA event, following in the footsteps of greats like Pete Brown, Charlie Sifford and Lee Elder; he was however, the most decorated African-American golfer in PGA Tour history before Tiger Woods’ career began. Calvin was born in Detroit in 1943 as the eighth of nine children, and as a child suffered a broken arm that was never set right, and ultimately that left him unable to fully extend his left arm. Despite that hindrance in technique, Peete is widely recognized as being one of the most accurate golfers in the sport. In regards to his swing, The Golf Channel had this to say, “One of the most accurate ball-strikers of his era, Peete led the PGA Tour in driving accuracy for 10 consecutive years from 1981-90. He won the Vardon Trophy in 1984, awarded annually to the Tour’s overall scoring leader, and compiled a 4-2-1 individual record in two Ryder Cup appearances, 1983 and 1985.”

Where most athletes begin practicing and honing their skills at an early age, Peete did not begin playing golf until the age of 23 – and quickly ascended the professional ranks. Speaking with The Golf Channel, Tim Finchem, the Commisioner of the PGA Tour, had this to say about Calvin Peete and his legacy – “Calvin was an inspiration to so many people. He started in the game relatively late in life but quickly became one of the Tour’s best players, winning and winning often despite the hardship of his injured arm,â€ said PGA Tour commissioner Tim Finchem. “Throughout his life, he gave so much, and we especially noticed it when he moved to Ponte Vedra Beach as he continued to support the community, the PGA Tour and our various charitable pursuits. Along with his wife, Pepper, he made such a difference working with The First Tee and junior golf in this area. Calvin will always be remembered as a great champion and an individual who consistently gave back to the game. We will dearly miss him.â€

In 2012, Calvin Peete was inducted into the African American Ethnic Sports Hall of Fame.