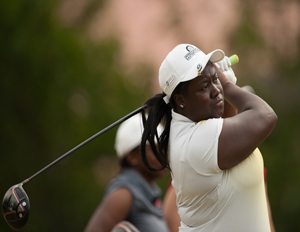 PORT ST. LUCIE, FL - MAY 13: Tiana Jones of Maryland Eastern Shore hits her tee shot on the sixxth hole of the Ryder course during the Second Round at the 2017 PGA Minority Collegiate Golf Championship held at PGA Golf Club on May 13, 2017 in Port St. Lucie, Florida. (Photo by Montana Pritchard/PGA of America)

The competition also included the PGA Minority Collegiate Golf Championship’s Career Expo, at which participating student-athletes learned about the global golf industry and employment prospects within and beyond it.

Hailed as “the most diverse and culturally significant tournament in golf,â€ the PGA Minority Collegiate Golf Championship comprises both team and individual competitions of men and women.

In the individual competition, Tiana Jones won a five-stroke victory over her opponent, making last weekend’s win her fourth consecutive one in the competition. This fall Jones, who attends the University of Maryland Eastern Shore, will begin her final year in the PGA Golf Management University Program, a four-and-a-half- to five-year course of study.

Only 18 schools actively offer the program; of those, UMES is the only HBCU.

The 25-year-old already has a bachelor’s degree, which she earned at South Carolina State University. She’s earning this second credential to prepare herself for a career in the PGA. Jones told me she wants to make a “deep and significant impact.â€

“There are 28,000 PGA members, but less than 1% are women, and even fewer are African American women–which is a total of seven.â€ Talk about a male-dominated industry! But Jones wants to make a difference in the organization by helping to prepare young people of color to win at this game.

“I can make more of an impact in the areas of diversity and inclusion just by becoming a member,â€ Jones says. “Aside from that, I can bring more minorities into the game and more women.â€

Once she completes the PGA Golf Management University Program, Jones, who competes on the LPGA tour and is seeking sponsorships, will be eligible to be a PGA Class A teaching professional. She says her coursework has taught her a lot, and she’s made connections that will be important to her PGA career.

“I’ve developed a network of colleagues through the program, such as the Executive Women’s Golf Association and the Club Manager’s Association.â€

The program includes a range of courses, such as accounting, marketing, front-office management, eco- and cultural tourism, cost control, developing a business plan, and hospitality coursework.

Jones, who’s been playing since the age of 3 and graduated from high school with a scoring average of 78, plans to eventually open her own golf academy to support the development of golfers of color from high school up to the PGA tour level.

Other winners at the PGA Minority Collegiate Golf Championship include Bethune-Cookman, which won in the Men’s Division I and the Women’s Division. Nabeel Khan defeated last year’s champion, Siyan Liu, in the Men’s Individual competition.