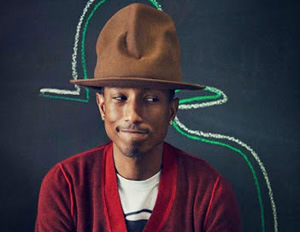 Music artist Pharrell’s buffalo hat was all the talk—including raised eyebrows, grimaces, jokes and side eyes—during and after this year’s Academy Awards (of which he was nominated for his hit song, “Happy.”) The savvy producer and singer was able to garner more exposure for his upcoming album as well as more than $44,000 to the charity of his choice after fast-food franchise Arby’s bought the hat that lent a nod to their logo.

He recently landed the cover of GQ and talked to the publication about how he lost the “Best Original Song” Oscar, his views on politics and twerking and his infamous hat looks.

The following quote from his interview got me thinking. (Bare with me. I’m getting to the point of all this soon.)

When asked whether he regretted his love of wearing trucker hats early in his career he said:

No. Uh-uh. I always did the same thing. I’ve dressed like I make my music. ‘No one’s doing that: I’m gonna go do that.’ With the trucker hat, it was just a different time. And it was just N.E.R.D. time for me, you know? And that’s what we represented—like, the anti-media image. We represented the real: black kids that skated.

About the buffalo hat, he went on to say:

Anything different, people are going to look at and go, “Ha ha ha ha, what is that??” Then, after a while, they do a little bit of research; they realize it’s Vivienne Westwood, an ode to her boyfriend at the time; they had a store together called World’s End. The guy who went on to sign the Sex Pistols, Malcolm McLaren.

Even the timing of his album was pushed up by record label execs due to the attention from the Oscars … and of course, the hat.

After reading this, my thoughts centered on one concept: What’s my “buffalo hat”—the one thing that gives me that much more of an edge over others in the industry? What’s the catalyst to standing out during what could be a career-boosting moment, gaining attention and garnering more exposure for the use of my talents?

To find this out, I asked myself three questions:

1. What am I naturally inclined to do or be drawn to?
2. How can I make that one thing stand out in a way that is not forced or fake?
3. What’s the best way to expose it so that it gets the positive attention it needs for dynamic results that equal more opportunities—and more money in my pocket?

For some, it can be their appearance, way of communicating or expressing ideas and imagery, or knack with connecting with people. For others it could be just taking advantage of a key moment —where there’s sure to be the right influencers and sponsors watching—and not only doing average, but taking cues from what’s instinctively within that is out of the box and extraordinary.

If you’re ever able to leverage a unique moment to stand out, like Pharrell, take it. Don’t be afraid. Even in some environments where the rules may seem more stringent, taking a risk based on research—in terms of your audience and the situation you’re involved in—can do wonders for your career.

I’d like to challenge all millennials—as I challenged myself—to find your ‘buffalo hat’ moment, niche or lane and embrace it to leverage outstanding opportunities in your career—no matter how different or utterly insane it may seem to some.