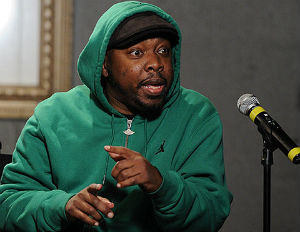 You might not know a great deal about Tribe Called Quest’s Phife Dawg, but you should probably know that he’s a huge sports fan — especially basketball.

“Though he grew up in Jamaica, Queens as a huge Big East fan, Phife’s first love has always been the UNC Tarheels,” writes The Shadow League’s JR Gamble.

“In fact, he has an entire UNC shrine in a room in his Oakland, California home dressed with everything from Tar Heel sneakers to jackets, to signed basketballs to any powder blue accessory a fanatic would have. With UNC suffering a tough 85-83 loss to Iowa State on Sunday, you know Phife is going through it.

“His saving grace is that he is focused on completing his anticipated solo project “MUTTYmorPHosis, so emotionally he has to keep it moving, but he’s never too depressed to just kick it about the rock and the rim. For the five-foot assassin that comes as easy as spitting a legendary 16.”

Here’s some of what Phife had to say as it concerned the tournament:

“Most people would have assumed that I’d pick UNC due to my well known, unwavering allegiance to the arch enemies of the Duke Blue Devils. Let’s not forget my admiration of the “The Legendâ€ Dean Smith. True indeed, but I became a fan of the ’81 squad that lost the championship to the Indiana Hoosiers led by coach Bobby Knight and an afro-wearing youngster from Chi-Town, Illinois named Isiah Lord Thomas. I loved James Worthy, Al Wood, Bronx native Jimmy Black and the Brooklyn-born Sam Perkins.”

Read more at the Shadow League.