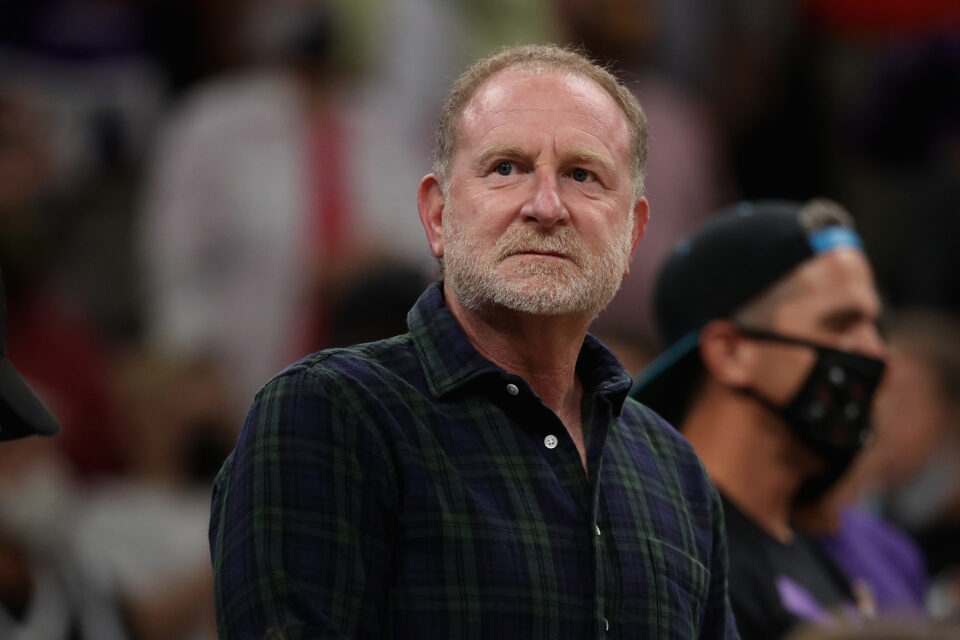 PHOENIX, ARIZONA - OCTOBER 13: Phoenix Suns and Mercury owner Robert Sarver attends Game Two of the 2021 WNBA Finals at Footprint Center on October 13, 2021 in Phoenix, Arizona. The Mercury defeated the Sky 91-86 in overtime. NOTE TO USER: User expressly acknowledges and agrees that, by downloading and or using this photograph, User is consenting to the terms and conditions of the Getty Images License Agreement. (Photo by Christian Petersen/Getty Images)

Robert Sarver, the owner of the Phoenix Suns NBA franchise and the Phoenix Mercury WNBA franchise has been suspended for one year and fined $10 million after an investigation into the Suns.

ESPN reports the NBA announced the punishment Tuesday after an investigation into the team found Sarver used the N-word at least five times “when recounting the statement of others” as well as “instances of inequitable conduct toward female employees,” including “sex-related comments” and other inappropriate comments concerning the appearance of Suns employees.

The NBA began its investigation into the Suns’ operations after ESPN published a story in November 2021 detailing allegations of racism and misogyny during Sarver’s time as Suns owner. The probe was conducted by the New York law firm Wachtell, Lipton, Rosen & Katz, which included interviews with more than 320 current employees as well as Sarver and reviewed more than 80,000 documents including emails, text messages, and videos.

The firm found Sarver engaged in instances of inequitable conduct towards female employees, made sex-related comments on numerous occasions, made inappropriate comments about the physical appearance of employees and on several occasions engaged in inappropriate physical conduct toward male employees. The investigation said Sarver “engaged in demeaning and harsh treatment of employees, including by yelling and cursing at them.”

The firm that conducted the investigation added that it did not find Sarver’s misconduct was motivated by racial or gender animus.

In a statement, Sarver said he did not agree with all the findings but apologized for his conduct.

“While I disagree with some of the particulars of the NBA’s report, I would like to apologize for my words and actions that offended our employees,” Sarver said in a statement through the Suns. “I take full responsibility for what I have done. I am sorry for causing this pain, and these errors in judgment are not consistent with my personal philosophy or my values.”

NBA Commissioner Adam Silver said in a statement the outcome of the investigation is the right one.

“The statements and conduct described in the findings of the independent investigation are troubling and disappointing,” Silver said in a statement according to ESPN. “We believe the outcome is the right one, taking into account all the facts, circumstances, and context brought to light by the comprehensive investigation of this 18-year period and our commitment to upholding proper standards in NBA workplaces.”

This isn’t the first investigation the NBA has conducted into the behavior of a franchise owner. Former Los Angeles Clippers Owner Donald Sterling was forced to sell his team in 2014 after a recording of him making racist statements was made public. Additionally, a 2018 investigation into the Dallas Mavericks organization revealed a history of sexual harassment and workplace misconduct spanning two decades.