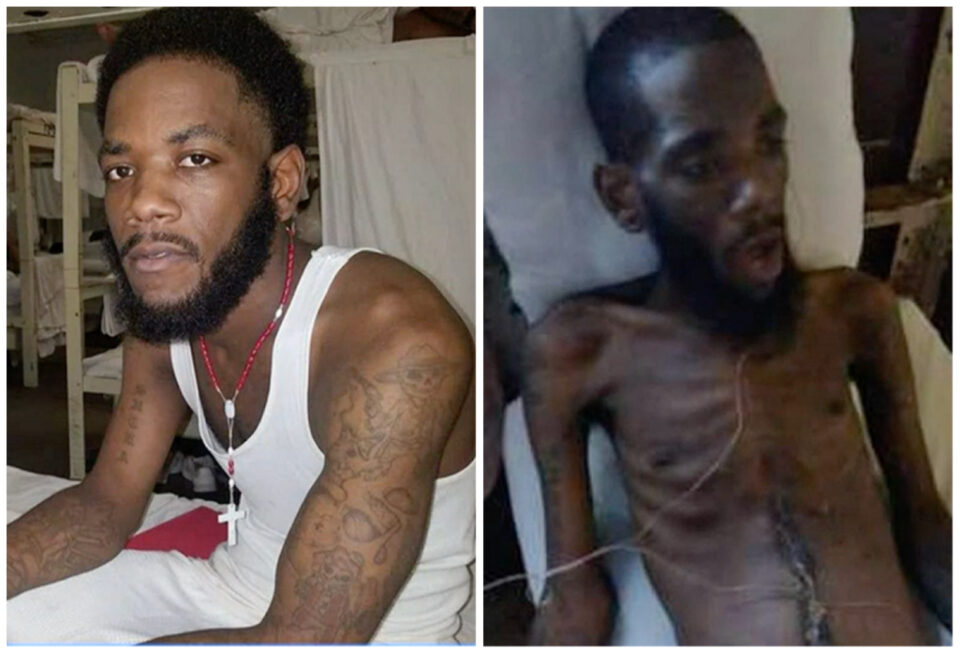 The family of 32-year-old Kastello Demarcus Vaughan is speaking out after they received pictures of their loved one looking emaciated and malnourished inside of an Alabama prison. Shocking images shared on Facebook by Kassie Vaughan on Sept. 21 reveal an obvious case of abuse.

According to NBC affiliate WSFA12 News, Vaughan is an inmate at the Elmore Correctional Facility in Elmore County. Kassie said on Facebook that she received the images with a note that said, “GET HELP.” Kassie also said that when she last saw her brother on July 24, he was in good condition.

MY BROTHER KASTELLIO VAUGHAN He’s currently an inmate placed at Elmore Correctional Facility. I’m coming to you right now based on my brother’s health. My brother’s health is rapidly declining. As you can see in these photos he is extremely malnourished. In these particular photos he cannot walk nor stand he is weak and vulnerable. My last visitation with my brother was July 24, 2022 he was in good condition. I am not a doctor but his health seems to be deteriorating. I received 2 pictures of him today saying “GET HELP,” she wrote. She added that her brother’s human rights have been violated and that she is concerned and scared for his health.
“I’m asking for you to simply share and get these pictures out this is violating human rights. I don’t see how you cannot get help when an individual is in this state. Tag all news stations please and anybody that can help with this issue. This is urgent and I’m concerned and scared for my brother’s health.”

The Alabama Department of Corrections released a statement claiming that Vaughan had received proper medical care and had been hospitalized three times over a two-month period.

“Inmate Vaughan has requested and received medical attention with the ADOC at least 11 times between July 30, 2022, and September 22, 2022. As a result, each time he received appropriate medical treatment and/or care. As part of that care, he has spent at least 13 days in the institutional infirmary. Additionally, he was treated at an outside hospital three times in the same time frame, resulting in one major surgery and at least 17 days in the hospital. The ADOC offers a constitutional level care to all inmates. However, inmates are not required to undergo care, just as citizens in the civilian world are afforded choice of whether to receive care.”

The prison also claimed that Vaughan had been in touch with his family, but they say that it is not true and they have been unable to speak with him nor have they heard from the prison. Another of his sisters, Kacie Vaughan, said that her brother looked dead in the images.

“What if that was your family and you got a picture of your big brother and your big brother looked dead,” she said. “For his eyes to be rolled back and him just sitting right there in general population I’m like, this like a zombie.”

Vaughan reportedly complained about stomach issues sometime in August and told the family he had asked for medical attention. Another inmate informed the family by phone that Vaughan had been taken to the prison hospital to have his small intestine removed.

Kacie Vaughan responded to the statement by the Alabama Department of Corrections and said that her brother repeatedly asked for medical help.

“He’s been offered all necessary treatment? Now y’all are trying to treat him because he’s on the media. The boy’s been asking y’all for help,” she said. “I believe that a prisoner serves their sentence and that is the consequence, not them being subject to foul living conditions.”

Vaughan is serving a 20-year sentence for unlawfully breaking and entering vehicles and burglary. He had been shot during a home invasion before he was incarcerated in 2019 but appeared to be in good health until his surgery in August.

Civil rights attorney Lee Merritt is representing Vaughan and shared an update on Sept. 23 noting that Vaughan had lost 75 pounds in one month.