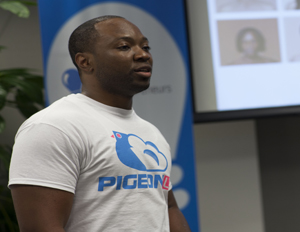 It’s rare that a brush with the law results in an innovative idea, a comfortable seed round of financing and the support of technology heavyweights such as Angela Benton, founder and CEO of the NewME Accelerator and Mitchell Kapor of Kapor Capital, a firm that invests in seed and early stage tech startups. But such is the case for Frederick Hutson, founder and CEO of Pigeonly, a data company that supports connections between those that are incarcerated and the outside world.

The idea for Pigeonly was sparked by Hutson’s own time behind bars. After spending four years in prison for trafficking marijuana, the serial entrepreneur began putting his plan into motion. The 29-year-old took his first-hand experience and applied it to the current prison structure, reaching a virtually untapped market and providing information that assists both inmates and the public.

The Brooklyn-born entrepreneur is shifting the current business model by going directly to the decision makers, the inmates. Â “With our system we have access to inmates nationwide; we’re not restricted to any particular institution,â€ adds Hutson.

Shortly after securing a $1 million seed round of funding exclusively from NewME’s network of investors, which includesÂ Kesha Cash of Jalia Ventures, Erik Moore of Base VC, former NFL player Shawntae Spencer and Kapor, among others, BlackEnterprise.com caught up with Pigeonly’s chief executive to discuss how his company removes the middle man and deals directly with the consumer, the tech behind his idea and what’s next for the data company.

How Pigeonly Works:Â “We’re really a data company and we use our data to drive different products and services,â€ explains Hutson. Pigeonly does all the backend work for users and creates consumer-facing products with the data generated. The company indexes all the prison and inmate related databases available, then algorithmically finds associations between various data points to develop a knowledge graph of those incarcerated.