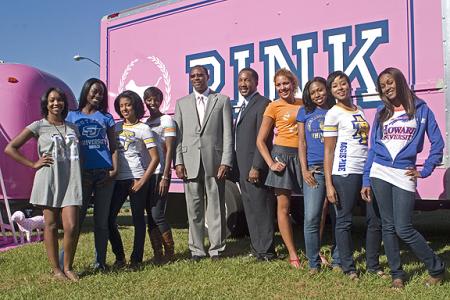 When Victoria’s Secret Pink visited Florida A&M University (FAMU) last fall to announce that the historically black university would be included in Pink’s roll out of its collegiate collection–the largest retail distribution that has ever been given to an HBCU collegiate apparel–the students responded by buying out every single item at the makeshift Pink pop-up campus store.

So it’s no wonder that Richard Dent, CEO of Victoria’s Secret Pink brand is expecting huge returns when Howard University, Hampton University, North Carolina A&T University, and Southern Louisiana University joins FAMU in the second phase of Pink’s collegiate collection, which already includes 33 other schools that were launched in June 2008.

“Students at Howard and FAMU went crazy for it after the initial press release and campus tour. It was one of the best sales from a campus pop-up store ever,â€ says Dent, noting that Pink preproduction samples with FAMU logos could be viewed on models but were not available for purchase. “The students wiped out the merchandise within a few hours. We had to go get merchandise from another store. We don’t know how much we could have sold because we ran out of product. I think that our experience so far will validate what people have been saying for many years–that African Americans are a strong and viable commercial entity that has been very underserved by major corporations.â€

The Pink brand is geared toward young, college-aged women and includes t-shirts, sweatpants, sweatshirts, underwear, and other apparel. Its Historically Black Colleges and Universities apparel is now available at Victoria’s Secret stores near four of the universities and will be available online Dec. 23. (Hampton apparel will appear in stores mid-January because they submitted approval late, according to Dent.) Pink is in discussions to partner with the Tom Joyner Foundation and Black America Web to do a joint promotion for the HBCU line of clothing under the Pink brand.

Additionally, a portion of the royalties from the sale of the merchandise will go back to each school. The percentage varies from school to school depending upon royalty agreements.

Pink is attempting to form relationships with the schools by offering paid marketing internships and scholarships. .

“Through the rollout of this program it allows us to be in a position to give back to HBCUs,â€ says Dent, a graduate of Florida A&M University’s business school and a member of the school’s board of trustees. He hopes the scholarships and internships will allow the company to give beyond what they are able to sell commercially,â€Â  “That is the thing that gets me excited about [the launch]. It allows me to satisfy the commercial objective of my day job but also allows me to satisfy the passion