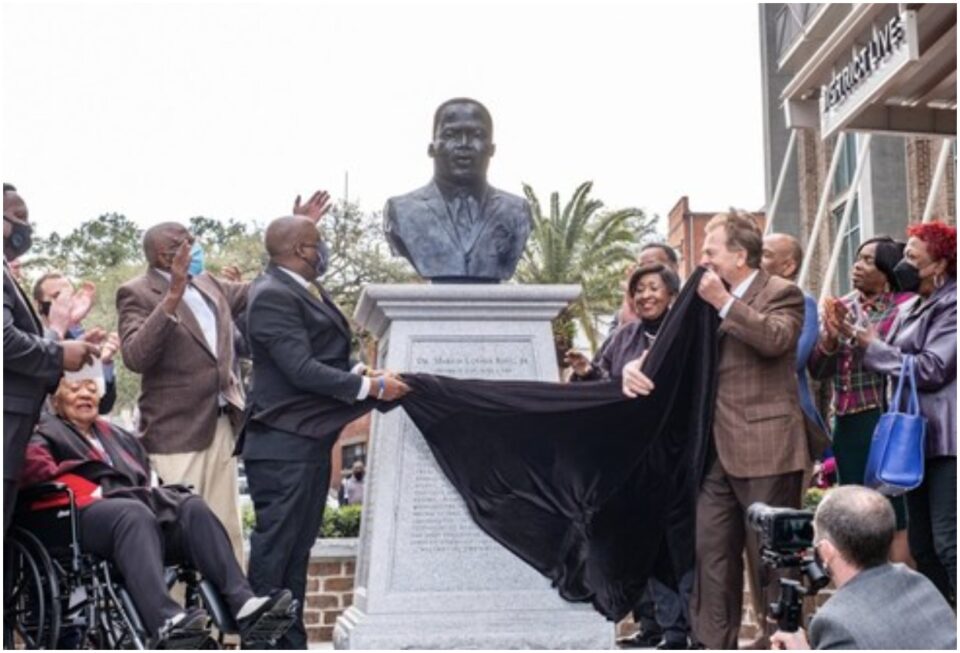 The memorial bust, which was approved by the King family, is the first monument to honor Dr. King in the City of Savannah and is located in Savannah’s first public park named in his memory.

“In the spirit of Dr. Martin Luther King, Jr. and on behalf of the entire King family, it is good to see your wonderful faces today,” said Dr. Naomi King, who received a standing ovation from the enthusiastic audience.

“Let there be peace on earth, and let it begin with us.”

The new Martin Luther King, Jr. monument was commissioned by The Kessler Collection and created by acclaimed sculptor Franco Castelluccio, who studied anatomy at the Art Students League of New York and the School of Visual Arts in New York City. The monument includes an inscription on a stately granite base and will anchor Martin Luther King, Jr. Park at Plant Riverside District in perpetuity.

“Today has been 10 years in the making,” Richard C. Kessler, Chairman and CEO of The Kessler Collection, told the audience gathered along the riverfront.

The construction of Martin Luther King, Jr. Park was a collaboration between The Kessler Collection, Georgia Power Foundation and the City of Savannah.

“I thank Richard Kessler for his vision and for this public-private partnership,” said Savannah Mayor Johnson, who supported Kessler’s plans for Martin Luther King, Jr, Park and for a King memorial tribute while serving as an Alderman for the City of Savannah a decade ago.

“Generations to come will see this memorial tribute to Martin Luther King, Jr. and will be inspired.”

In addition to the dedication ceremony and commemorative memorial unveiling, Plant Riverside District presented free live music and performances in honor of Martin Luther King, Jr. throughout the holiday weekend as part of “Let Freedom Ring: A Tribute to the Late Martin Luther King, Jr.” Highlights included performances by Reverend Teddy Williams and Company with special guest Savannah Jazz Hall of Fame member Huxsie Scott as well as a musical tribute by William Austin Smith, which incorporated audio from King’s legendary “I Have a Dream” speech.