Poet Jayne Cortez Passes Away at 76 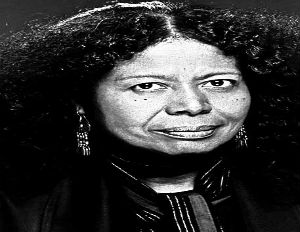 Poet Jayne Cortez died this past Friday, December 28, at age 78.

She was the author of ten books of poems and nine audio recordings. Her signature style was to recite her poetry with music, usually a live jazz band, a style that could be compared to spoken word. In later years her touring band was called the Firespitters.

Cortez, who performed throughout the world, won an American Book Award in 1980 for her book of poemsÂ Mouth on Paper.

Born in 1936 inÂ Fort Huachuca, Arizona, and raised inÂ California, Cortez was once married to jazz saxophonist Ornette Coleman and they had one son, jazz drummer Denardo Coleman, with whom she collaborated artistically.

She later married sculptor Melvin Edwards who remained her husband until her death. Ms. Cortez was a dual citizen of Senegal and the United States, andÂ is survived by, among others, her son Denardo Coleman and her husband Melvin Edwards.