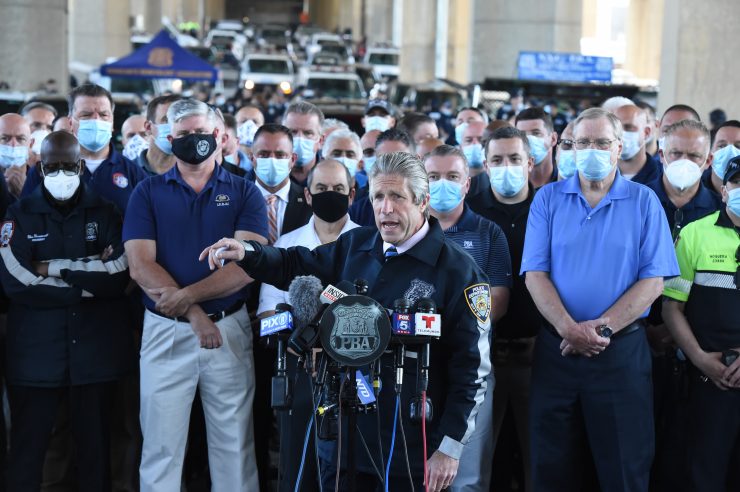 Almost 20 police unions have filed a lawsuit against the City of New York Thursday, claiming elected officials have overstepped their boundaries with the Eric Garner Anti-Chokehold Act.

According to the Daily News, the New York Police Department’s patrol guide has prohibited the use of chokeholds since 1993. However, it hasn’t stopped police officers from using chokeholds. The Eric Garner Act declares the move as a Class A misdemeanor punishable by fines and up to a year in prison.

In June, amid the nationwide defund the police protests and actions to cut police budgets, PBA president Patrick Lynch called out New York officials for the law.

The law “fails to give officers notice of the precise sort of conduct not permitted when effecting an arrest,” Lynch said. “An ordinary police officer will be unable to discern whether many ordinary activities taken in the course of the apprehension and arrest of a suspect violate the statute.”

The New York City council voted to cut $1 billion from the NYPD’s budget and commit the funds to social services and programs including adding internet to public housing.

New York Mayor Bill de Blasio has insisted the bill does not violate officers’ rights under state law and that it will stand past this lawsuit. De Blasio also dismissed claims that state police and other law enforcement agencies would stop enforcing the law over fears of running afoul of the new act.

The bill was part of a slate of police reform bills passed earlier this summer and was signed into law last month. The bill was named after Eric Garner, who was killed in 2015 when NYPD officer Daniel Pantaleo held him in a chokehold.

The bill was twice amended in June to establish “sitting, kneeling, or standing on the chest or back” while arresting someone as a misdemeanor.

Garner’s death, like George Floyd‘s, led to police protests and demonstrations against the police in New York City. Pantaleo was never charged for Garner’s death but was fired last year by NYPD Commissioner James O’Neill.