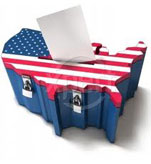 The polls are open in Maryland as Lt. Gov. Anthony Brown continues his bid to become the state’s first black governor and only the third African American governor in U.S. history.

Voters decide in the June 24 primaries who gets the Democratic and Republican nominations to go head-to-head in the final lap of the Free State’s race for governor which will be decided in November.

On the Democratic side, Brown is running against Attorney General Douglas Gansler and delegate Heather Mizeur.

Gansler’s pitch to lower taxes and create more jobs is gaining traction. Mizeur is campaigning, “To get special interest and corporate influence out of this state and put middle class families and their needs at the head of the table.”

Brown wants to build better schools and safer neighborhoods, create more opportunities through education and create more jobs in the state of Maryland.

This one is being called one of the costliest and ugliest statewide Democratic primaries in Maryland history, with both Gansler and Brown, the two leading candidates, in a high profile mud fight. According to Politico.com, “Only Charles Rangel‘s House primary in upper Manhattan comes close.”

Most of the candidates were out in full force Monday in a final push to lure voters to the polls in a state more accustomed to voting in September. This is Maryland’s first June primary since the Eisenhower administration.

According to the Baltimore Sun, “All 188 seats in the General Assembly are up for nomination, as well as state’s attorney contests in most counties and Baltimore, 15 county school boards, county executives in several large jurisdictions, judges for orphan’s court, sheriffs, and a handful of mayors across the state.”

6 Ways To Land A Partnership With A Major Corporation

10 States with Most Student Loan Debt